Living in the swamp means my home is literally crawling with critters. Unfortunately I haven't been able to find pet perfection. I suppose that means I'll need to keep looking.

Honey Swamp is a 2013-introduced and all-around character. She is a swamp monster, specifically the daughter of the Honey Island Swamp Monster, native from New Goreleans, Louisiana, Boognited States of Scaremerica, who aspires to be a cinematographer. That is, she's already one, and good at what she does, but she has yet to make it in Hauntlywood and beyond. Having come into contact with the movie star Elissabat and the director Sofeara Gorepola has moved her career along greatly, but, being a perfectionist who knows that time is an investment, Honey seeks to grow bigger still. She's also a girl of many talents besides photography and filming, such as cooking and swimming. There is a possibility of her swamp monster years age adding up to 15 years, since it is 115, ending in the number fifteen. She is either from New Goreleans, Louisiana or New Goreleans, Booisiana.

'I’m a proper Southern ghoul from the swamps of Honey Island. My mama always taught me if you work hard and follow your screams, you can be anything you want to be. Well, I want to be a world-famous cinema-togre-pher in Hauntlywood.'

She is voiced in English by Laura Bailey.

Honey is a Southern Belle born and raised in New Goreleans. She is an aspiring cinematographer. She is sweet and caring for others, always willing to help. She's very feminine, and social, as well as a perfectionist. Incredibly polite, Honey is a hard working monster that, even though she is sweet and delicate in her actions, she won't allow anyone bring her down, being the strong, opinated young monster that she is. Being true to her Louisiana roots, her favorite food is dead beans with jamboolaya, the jamboolaya being the Louisiana food, and dead beans being the monsterified version of red beans.

Honey has medium aquamarine skin and a dark green, pale green white Afro. She has slit pupils similar to a cat, and small sharp teeth. She has a blue blouse with a matching billowy skirt that has throne flower designs and pink heels that have water monster designs that look like dripping wax. She has on one white pearl bracelet, a pink belt with a rose belt buckle, and a small pink hat on.

Honey refers to her mother as Mama Swamp. She has a fascination for vampire royal history. Her father is the Honey Island Swamp Monster.

Honey is close friends with her movie crew: Clawdia Wolf, Viperine Gorgon, and Elissabat. In addition to them, she has also bonded with Operetta, who is from the nearby Gnarlston. Their grandmothers are childhood BFFs. 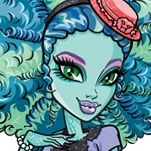 Add a photo to this gallery
Retrieved from "https://monsterhigh.fandom.com/wiki/Honey_Swamp?oldid=348788"
Community content is available under CC-BY-SA unless otherwise noted.