Holt Hyde was trademarked on May 6, 2010 and his first doll came out in Mid October, 2010. As of January 01, 2015, his doll number totals 2 and makes up 0.59% of the entire Monster High doll collection. Other merchandise of his is not yet available.

Doll: Holt's molded plastic hair is in the shape of a tame bonfire. He sports a yin-yang tattoo on his back between his shoulders also a eyebrow piercing on his left eyebrow with a plastic sliver ring on left thumb.
Clothes: The doll wears a red leather jacket with gold stitching also black and white tank top underneath as well as black and purple pinstripe pants with a flame pattern at the hem.
Accessories: The accessories include a yellow belt, black and yellow high-top sneakers, black and orange headphones, and an orange backpack designed to look like a mix table and with a black and white checkered flap.
Extras: He comes with a Crossfade figurine, an orange doll stand, and a diary.
Notes: The orange glasses shown in the stockphoto do not come with the doll. They actually belong to Gloom Beach Jackson Jekyll.

Doll: Holt's molded plastic hair is in the shape of a tame bonfire. He does not sport a yin-yang tattoo on his back between his shoulders. also a eyebrow piercing on his left eyebrow without a plastic sliver ring on left thumb.
Clothes: He has a red tank top with black sleeves, with orange and yellow flames going around the center of the shirt. In the center is his skullette, and it has a checkerboard design on it. His gray pants have black outlines of flames on them, and clear orange and yellow plastic in flame designs on the outer sides of the pant legs. His shoes are clear, orange sandals, and the straps are shaped like flames.
Accessories: He comes with clear, orange sunglasses, with large flames sticking out from the lenses. The arms of the glasses are shaped like flames. His clear orange beach bag is shaped like a mix table.
Extras: He comes with a black beach towel, which is decorated dolphin-shaped flames.
Notes: This doll is exclusive to Justice. 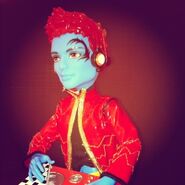