Crossfade, a chameleon. He's the best pet ever 'cause change never bothers him and he totally digs my music.

I'm down with all the monsters that love my music.

Holt Hyde is a 2010-introduced and all-around character. He is the great grandson of Dr. Jekyll’s alter ego, Mr. Edward Hyde. Due to his mother being of the Jekyll/Hyde lineage, he has a human alter ego by the name of Jackson Jekyll. Holt himself is a mixture of the Hyde-condition and a fire elemental, making him much more willing to break the rules and shirk responsibilities than his counterpart named Jackson. He and Jackson do not get along very well because of this, but they do care for each other. Holt is an enthusiastic and popular DJ around New Salem and is often asked to take care of the music when his fellow students have another party. In the books, his name is D.J. Hyde.

Holt, like his alter-ego Jackson, is voiced by Cindy Robinson in the English version of the cartoon.

In the Hebrew version, he's voiced by Dan Kizler, who also voices his counterpart Jackson Jekyll.

Holt is a DJ, so he's very social and into promoting his music. He admits that he is "hot-headed" and can have a bit of a temper.[1] However, when it comes to his music, Holt has access to a quiet side in favor of the creative process. He enjoys to spend time at a small, secluded spot near Epic Falls during those periods. Holt Secret Hyde-a-Way His choice in clothing style is a black-and-white shirt may be a reference to his split personality alter ego side of Jackson.

Holt has blue skin, sunrise-like eyes and a black symbol on his face. It's most likely a tattoo, however if it was, then Jackson would probably likely have the tattoo as well. His hair is made of flames and he has a yin-yang tattoo between his shoulders where Jackson has the tattoo on his back. He has an eyebrow piercing on his left eyebrow, which Jackson shares.

Throughout each storyline, Holt and Jackson have no control over their transformations and change from one into the other under specific circumstances. In the cartoon series, it seems to be music that causes Holt/Jackson's transformation. This is first seen in "Hyde and Shriek".

In his 'Basic' diary, Holt's transformation into Jackson Jekyll normally occurs at sunrise and lasts until sunset. Holt noted that when he was trying to see what the town was like during the day, he blacked out at the moment of sunrise. However, in Jackson Jekyll's 'Between Classes' diary, it's revealed that the trigger for Jackson's transformation has since changed, so that it is now also music as in the cartoon. Specifically, "music with a 4/4 time signature played in excess of 90 decibels" triggers the transformation into Holt. However, according to the diary, because of Jackson's "elemental heritage + Hyde transformation + teenage boy" status, it is likely to change again at least once more before he hits adulthood.

In Holt's 'Basic' diary, he displayed one example of having some elemental powers from Jackson's parental heritage, as he melted the pen he was using and his entry indicated this had happened before. His bio also uses several fire related puns.

In the Monster High book series, the change is caused by temperature shifts, be it from him getting hot from embarrassment or from outside forces like a hot day.

There are times when Jackson's and Holt's memories and abilities leak over to the other. For example, in the diaries, Jackson is able to keep up with Deuce Gorgon in a basketball game (to Deuce Gorgon's surprise),[2] while Holt recognizes Draculaura at a club despite the fact it's the "first" time he meets her.[3]

The exact way Holt's family tree looks is fuzzy at the moment. In Jackson Jekyll's 'Between Classes' diary, it is revealed that it's Holt's mother from whom the dual nature comes, while his father is revealed to be a fire elemental and implied to be the parent through which Holt is the cousin to Heath Burns, a fact first mentioned in "Fear Pressure". However, Ghoul Spirit states that Holt's mother is the sister of Heath's father, making the exact familial relations unclear.

Until he was 16 years of age, Holt did not know he had a human half in the form of Jackson. Neither his parents apparently thought it was something they needed to inform him about.

Especially, Holt's mother is very protective of her little boy, and seeing him get hurt is something that can trigger her transformation into the mode most suited for helping him out. Also according to Holt's 'Basic' diary, Holt's mother doesn't keep the same job for long and the family regularly moves to a place closer to her new job.

In the Monster High books, Jackson regards Holt as his brother, as he reveals to Melody Carver: "Because D.J. likes her. I can't do that to him...or me, or whoever....He's kind of like my brother, I guess." Heath Burns is not related to Holt in the books, and Holt's father is absent, leaving it unclear how much of conventional canon is canon for the Monster High books.

Holt has an uncle who owns a farm. It is not stated what side of the family his uncle is on, although it's slightly more likely he is a Jekyll/Hyde because he has no problem only seeing Jackson out. Facebook

On his Monster High website profile, he's friends with all the monsters, who in turn love his music. Draculaura was at a club when he was performing.

In one of Monster High's Facebook posts, it states that Hyde worked with Deuce to make a go-cart for the Monster Derby, so it could be assumed that Deuce is friends with both Jackson and his alter ego[4].

In his 'Basic' diary, he goes on a date with Operetta. He also asks Operetta to Prom 2014 through song. He also spots Draculaura at a club, and calls her "a hot little vampire" and her nickname "Ula D". His feelings for Draculaura seem to be a result of the memories he shares with Jackson.

In the webisode "Hyde and Shriek" Holt meets Frankie Stein, calling her a "high-powered hottie" and "Frankie 'Fine' Stein". This may also be a result of his shared memories with Jackson Jekyll, as he had never met Frankie before to know her name, let alone develop an interest in her, or he has the same interests as Jackson. He seems to really care for Frankie as much as Jackson does, and loves to make her happy. He is a little disappointed when Frankie says they can't go out yet until he works things out with Jackson, but is willing to wait. They still stay friends and don't mind waiting for Frankie. In the webisodes of the cartoon, especially in "Phantom of the Opry", and other webisodes, he calls her "Franken'fine" as a pun on the name "Frankenstein" as seen in Phantom of the Opry, and some occasions, "Frankie Fine" without her name "Stein" as heard in "The Bermuda Love Triangle".

In the movie "Ghouls Rule" Holt expresses interest in Jackson's normie classmate Clair and attempts to kiss her when he quotes that Jackson has "fine taste in ladies" to which however she appears to have exclusive interest in Jackson, putting headphones on Jackson to prevent him from hearing the music to share a kiss. In "Ghouls Rule", because Holt and Jackson sort of share the same brain, and have a combined mind set, he knows and understands Jackson's feelings as vice versa, and even agrees with Jackson about Clair.

In the Monster High book series, he has a crush on Frankie and calls her "Firecracker".

Holt and Jackson are inspired by Dr. Jekyll and Mr. Hyde from the Robert Louis Stevenson novel of the same name. In the story, Dr. Henry Jekyll was a scientist who created a formula that in theory could eradicate all the darkness from someone's mind but as a side-effect the formula split Jekyll's personality in two and created the persona of Mr. Edward Hyde. Mr. Hyde embodied all of Jekyll's wild and dark traits leading him to become a wanted fugitive, causing trouble for both personalities. 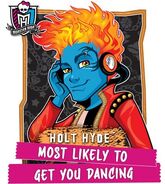 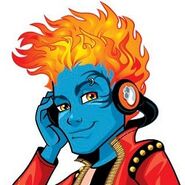 Retrieved from "https://monsterhigh.fandom.com/wiki/Holt_Hyde?oldid=349690"
Community content is available under CC-BY-SA unless otherwise noted.