I am adorned in a lovely set of crown jewels made especially for me since I am the royal cobra.

Cleo de Nile. I know I shouldn't boast but Cleo de Nile is definitely the most regal pet at Monster High.

Sunning myself on my royal rock.

When Cleo de Nile forgets to heat my rock before my royal nap. I hate crawling onto a cold rock.

It depends what I am in the mood for when I decide to grab a bite.

Hissette is a light blue Egyptian cobra with all sorts of funky jewelry on her neck, a small crown on her head, and a small ring on her tail.

"Her hiss is, honestly much worse than her, er, somewhat poisonous bite"

'Basic' Hissette is curled up in a sitting position.

Hissette is one of the second three Friends plushies released and is packaged with Cleo de Nile. 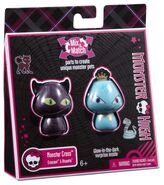 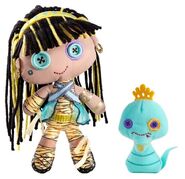