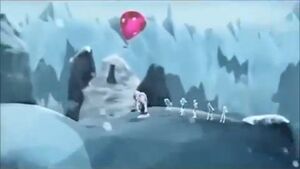 The Himalayas, is a mountain range that separates South Asia from East Asia. It is located in five countries: Bhutan, India, Nepal, Tibet, and Pakistan, and at one portion it borders Fangladesh to the south. The Himalayas, or at least the areas located in Tibet and Nepal, are home to yetis.

Abbey Bominable and her family live in a village somewhere in the Himalayas. On Headless Headmistress Bloodgood's request, the Bominables sent Abbey to Monster High, from which she returns every weekend.

In pursuit of Clawdeen's sketchbook, Abbey and a few of her friends arrived at a region of the Himalayas familiar to Abbey. They were discovered by one of Abbey's cousins, who helped them find the sketchbook in a bird's nest. Before they could grab it though, the sketchbook jumped down and landed on the roof of a train. The group quickly got itself a handcar to follow the sketchbook. From Fear to Eternity

Retrieved from "https://monsterhigh.fandom.com/wiki/Himalayas?oldid=349026"
Community content is available under CC-BY-SA unless otherwise noted.