Doll: Hexiciah is a large bodied male, much like Manny Taur. His hair and moustache are molded on. His hair is black with a detachable middle part that is slightly wavy. The rest of the hair is slicked back and he features sideburns. He has light green eyes, with one eye being normal and the other one featuring a gear shaped iris, which is implied to be a robotic eye. his skin is tan and features a molded robotic arm in copper with some rust like detailing. His arm is fully articulated, but unfortunately, his hand can only rotate.
Clothes: Hexiciah wears a white rolled sleeve button down with a purple ascot and a blue pinstripe vest with gold buttons. He wears a pair of red corduroy cropped pants.
Accessories: Hexiciah wears knee high victorian style shoes with white base and 3 silver buckles that is strapped with a copper band with a gear motif and finishes off with a pair of black dress shoes. He holds a hammer and wears a brown tool belt with a wrench and a flat head screwdriver.
Extras: Hexiciah comes with a stand and a diary.
Notes: Hexiciah is only available in a two pack with his daughter, Robecca Steam, which is exclusive to San Diego Comic-Con International 2016 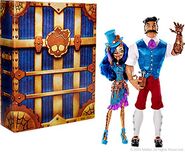 Add a photo to this gallery
Retrieved from "https://monsterhigh.fandom.com/wiki/Hexiciah_Steam/Merchandise?oldid=334644"
Community content is available under CC-BY-SA unless otherwise noted.