Headless Headmistress Bloodgood debuted in the cartoon series in the Volume 1 webisode "Totally Busted", which premiered on July 30, 2010. She is voiced by Laura Bailey in the English version of the cartoon.

Headless Headmistress Bloodgood is ill, so Lou Zarr takes over Trigular Calcometry 101 from her. Substitute Creature

Frankie Stein and Cleo de Nile have broken a millennia-old statue, so they are ordered to the headmistress's office. Cleo blames everything on Frankie, which Bloodgood accepts as truth. She then informs the two the vandalism was a good thing, because one of the school's first teachers had been trapped within the statue for ages. She thanks Frankie profusely for her actions, much to Cleo's annoyance. Totally Busted

It is both Friday the 13th and Halloween, a rare occurrence that spells bad luck galore until three o'clock. Ms. Bloodgood has her head stolen by a frog. Freakout Friday

Cleo de Nile uses her mind-control idol to get Bloodgood to annul the homework for Trigular Calcometry 101. Idol Threat

Bloodgood is one of the people approached for a FrightTube view by the Fear Squad. Falling Spirits ‎

When the Fear Squad gets invited to Gloom Beach, Headless Headmistress Bloodgood congratulates them through the intercom. Fatal Error

The mere thought of the horrors of the night of Friday the 13th at Monster High has Bloodgood terrified. She swiftly flees the school with Nightmare. Frightday the 13th

Bloodgood hands the trophy of the swimming contest to Gil and Lagoona. Fear Pressure

In "Fright On!", Ms. Crabgrass shows up on stage and announces that Headless Headmistress Bloodgood will begin her speech. Bloodgood shows up a moment later and cuts straight to the case: Monster High will be merging with Belfry Prep and Crescent Moon High to share the spirit of acceptance with monsters so opposed to each other as part of an experiment that is to bring all monsters together and eventually monsters and humans. Crabgrass and the students are shocked, but no one opposes the decision. Bloodgood appoints the Fear Squad as the welcoming committee, something that only excites Frankie.

The next day, Van Hellscream shows up in Bloodgood's office. Bloodgood is elated, knowing Van Hellscream as a monster expert and promoter of human-monster relations, but Nightmare is immediately wary of the human. And with good reason, as Van Hellscream is threatened by the idea of monsters getting along and potentially teaming up against humans. He and Crabgrass use Gorgon Powder on Bloodgood to turn her into a statue, while Crabgrass takes on the appearance of Bloodgood so as to manipulate the school from within.

During the unveiling of a statue, Frankie and Lagoona notice Bloodgood drinking with her finger, and along with other evidence, Frankie realizes the woman is actually Crabgrass. As the students wonder where the real Bloodgood is then, the statue is unveiled... leaving no guess as to what has happened to Bloodgood. Frankie seeks out Deuce to ask if there's an antidote to being petrified, and Deuce answers he'll ask his mother.

Deuce returns to Frankie with news that there is a powder which needs to be administered during the first new moon, but also that no one has seen it in a good century. Frankie realizes that the suspicious box she saw earlier in Bloodgood's office must contain the powder, and she enlists Abbey, Lagoona, and Spectra to help her get Van Hellscream and Bloodgood away from the office.

Van Hellscream is aware of all these events and brings them together to work to his advantage. He sets a trap for Frankie and Abbey to capture them and Bloodgood that night, while he sends Draculaura a text message that makes it seem like Clawd wants to talk to her that night at the statue of Bloodgood, and also while he sends Howleen a text message that the vampires are planning to carve "Vampowerment" in Bloodgood's statue that night. Through this, he captures all five in one move and takes them to a place deep inside the catacombs. He explains that he had Draculaura and Howleen captured so that the vampires and werewolves would accuse each other of harming their kin, and that he wants the experiment that is Monster High to fail so that the monsters can never join forces against the humans. By his plan, the werewolves and vampires will be fighting by the time the Skullastic Superintendents arrive and Monster High will be closed. With all that said, he leaves his captives as food for the giant tentacles in the pit underneath their cage.

Right before the fight can commence in the gym, Howleen and Draculaura burst in to tell both sides to stop. The werewolves and vampires are surprised to see their kin well and free, so Bloodgood and Frankie explain Van Hellscream's plan and why Monster High is such a threat to him. Realizing they've been manipulated for awful goals, the vampires and werewolves agree to peace and the entire student body gets together to quickly put up a party to leave a good impression with the Skullastic Superintendents. The plan succeeds, and after they've left, the students and Bloodgood confront and corner Van Hellscream and Crabgrass. Van Hellscream threatens to use one of his many potions and charms against the monsters, but Deuce beats him to it, petrifying both him and Crabgrass. Following this little interruption, the party continues. Fright On!

TBA Uncommon Cold Ghosts with Dirty Faces Hickmayleeun The Nine Lives of Toralei Unlife to Live I Know What You Did Last Fright Honey, I Shrunk the Ghouls Undo the Voodoo The Halls Have Eyes

Bloodgood drinks some of Frankie's juice before hitting the dance floor with the other students. Frankie's Joltin' Juice

Bloodgood volunteers as a fortune teller at the Spring Break carnival, not-so-subtly handing out study advice to the students she won't see for a week. When school gets back in session, she is approached by a human who offers to hold a speech about tolerance. Bloodgood readily accepts and summons the students to the auditorium. The guest speaker, however, turns out to be Bartleby Farnum, an enemy some students made during their vacation on Skull Shores who is out to capture new student Andy Beast. He triggers Andy to take on his giant form, which causes huge damage to the school building. Although Farnum is stopped and Andy saved, the damage to Monster High makes the location unfit for classes. Bloodgood extends Spring Break for another week so the school can be repaired. Escape From Skull Shores

After Monster High's loss from Granite City High in a round of Skultimate Roller Maze, the former has to give away its school crest as per tradition. The result of this is that the school starts slowly falling apart. With all the members of the Monster High SKRM team injured, Bloodgood is preparing for the end of the school. However, a new, all-girl team is formed to pick up the glove. Though girls aren't supposed to play SKRM, Bloodgood supports the new team from the start and eventually sees them reclaim the school crest. Friday Night Frights

When several of the students are suspected of committing vandalism to New Salem High, Bloodgood gives them detention. Later, after Frankie, Abbey, Lagoona, and Deuce attempt to and fail to save Jackson Jekyll from New Salem, and Lilith Van Hellscream exposes him as Holt Hyde to the New Salem Sheriff, the Sheriff takes Holt in, but allows the others to return to Monster High to face Bloodgood. She assigns them detention again, and threatens them with expulsion if they go to New Salem High again, before receiving a phone call from the Monster Elder Council to watch the television as the Sheriff announces his plans to execute Holt with the Trick-or-Treatment. Although Bloodgood is shocked by the Sheriff's intentions, the Monster Elder Council strictly forbids her from taking any action to try and save Holt's life, leaving her helpless as she has to follow the Council's orders. Ghouls Rule

Bloodgood is visited by Lord Stoker, Prime Minister of the Vampires, as he has come to Monster High to pick up Draculaura and take her back to Transylvania as she has been chosen to be the next Vampire Queen. Bloodgood is impressed by Draculaura becoming royalty, and after Drauclaura asks that Clawdeen, Robecca, and Cleo come with her to keep her company since they are her friends and it would be deaducational since they would be able to learn about her monster scareitage in person, Bloodgood grants her request after some thought as Lord Stoker agrees to it himself. Frights, Camera, Action!

Bloodgood is walking Nightmare past the auditorium when she overhears Cleo imitating her for Mr. Where's play on Monster High's history as part of the school's Bite-Centennial Anniversary Celebration, voicing to Nightmare that Cleo does not sound half-bad in her portrayal of the Headmistress, having no idea of the earlier incident that caused Cleo to be fused with Toralei into Cleolei. Later, she is presumably watching the final performance of the play alongside Mr. Where, Manny, Abbey, and many of the other students and faculty, and applauds afterwards for a wonderful performance by Frankie, her friends, and the new hybrid students. Freaky Fusion 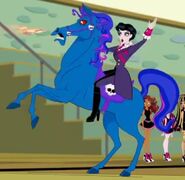 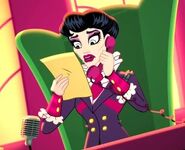 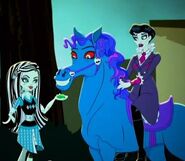 "If you do all your homework... I see an A in your future..." Wow, great prediction, Bloodgood.

"You are the next Vampire Queen!"

Bloodgood watches Draculaura overjoyed at being the next Vampire Queen

"I suppose it would be a good chance to learn about your monster scareitage in person..."

Smiling at Clawd when he thinks he's in trouble

Bloodgood is impressed with Cleo's portrayal of her in Mr. Where's play
Add a photo to this gallery
Retrieved from "https://monsterhigh.fandom.com/wiki/Headless_Headmistress_Bloodgood/cartoon?oldid=349857"
Community content is available under CC-BY-SA unless otherwise noted.