Nightmare is my horse and constant companion. Although her nervous demeanor belies her rather intimidating name, she is almost always ready to charge into any situation at a moments notice… almost.

I am content with my own company and a good book.

Headless Headmistress Bloodgood (whose real name is Nora Bloodgood) is a 2010-introduced and all-around character. She is a headless horsewoman and the principal of Monster High ("headmaster"/"headmistress" is another term for "principal"). Two centuries ago, she was a young librarian just out of college herself when she took the bold step of applying for the job of headmistress of a school that would allow all monsters and humans involved in monster society to attend. Because few believed this would work, Bloodgood had little competition and was given the job. Defying expectations, she made Monster High work. In addition to her duties as headmistress, Bloodgood hosts classes like Trigular Calcometry 101 and is known for giving out tons of homework. Her faithful companion is her horse Nightmare, whom she rides even through the school halls and who sometimes acts as her secretary and she is the daughter of the headless horseman from the Legend of Sleepy Hollow.

Headless Headmistress Bloodgood is voiced in English by Laura Bailey.

In the music video for the Monster High Fright Song, there are several character analogues who received creative interpretation by the video crew. The one that portrays Bloodgood the most is the Headless Boy and is played by Lamar Johnson. It is also possible that the analogue for the Headless Headmistress could be the teacher briefly shown writing on the board towards the end of the music video, although only her arm is seen. The teacher's laugh at the end does sound like the Headless Headmistress in the cartoon series.

Over two centuries ago, a young Bloodgood was a rider without a ride. Unlike many of her fellow riders, Bloodgood hadn't been able to catch the attention of any nightmare. One day, when performing yet another "twinning" process, unsure of success, a herd of nightmares finally surrounded her. It was the time, all she had to do was wave her lasso and wait to be approached by one, after all those failed attempts. However, the lasso slipped from her hands and the herd fled. Desperate and sadden that no nightmare had chosen her yet, reminded of her father's words: "You don't choose a nightmare, the nightmare chooses you", she broke into tears, unaware that in fact a nightmare had stayed for her, huffing at her neck. Finally the rider was united with the nightmare, and a friendship bloomed. Monster High Figurine Collection diaries

In the 19th century, Bloodgood was but a young librarian only just out of college herself when she took the bold step of applying for the job of headmistress of a school that would allow all monsters and humans involved in monster society to attend. The authorities of the New World, in need of someone to take the charge, found that someone as young and inexperienced as Bloodgood wasn't at all suiting for the job. However, she was able to win them over with her passion and ideas of change.Wydowna Spider's SDCCI diary Few monsters believed Monster High would ever work, so Bloodgood had little competition and was given the job. Defying expectations, she made Monster High work and with it united all the monsters of the Boo World, those seeking to live a life of equality and acceptance.

Through two entire centuries, Bloodgood has been Headmistress Bloodgood and has never once questioned the job. Running the school with an undeniable passion, she and her students can overcome obstacles and keep Monster High alive, and with it, revolutionize the Monster World.

Headless Headmistress Bloodgood is your typical favorite teacher. She loves her job and her school and adores her students, but duty makes her strict at times, yet she knows what's best for her students. She enforces the rules and expects the highest of respect. She values education and acceptance above everything, the thing that brought her close to Monster High.

However, she can be shown to have a good sense of humor and has been used for comic relief more than once, as it's been revealed that she can be a bit forgetful.

Although she is generally fair, her punishments are brutal, such as eternal homework or cleaning duty.

Based on the Headless Horseman, Bloodgood has short black hair with purple streaks, silver-ish eyes and pale skin. She is also very tall, even without her head.

Her choice of clothing resembles the pre-Victorian fashions of the late 1820s (not coincidentally, around the time that "The Legend of Sleepy Hollow" was published). She wears a purple frock coat, a white frilled shirt, a red cravat, black trousers and black riding boots. Her lips are dark purple-red and she wears purple eye shadow. She has black and purple hair in a tight bun, but in her artwork and in the webisodes, she sports her black hair with purple streaks all worn down.

According to Abbey's 'School's Out' diary, Bloodgood is close friends with Abbey's parents and allows Abbey to stay at her home during the school year, as Abbey and her family live far enough away from Monster High where Abbey would be unable to attend the school as a day student.

Jane Boolittle also seems to get along with her.

It has been implied that her and Hexiciah Steam also had a romantic relationship.

Although strictly speaking not a pet, Bloodgood has Nightmare, her shadow horse. Her name "Nightmare" is a pun of the word nightmare and the fact that female horses are called mares.

According to Frankie, Nightmare is only 3 years old. 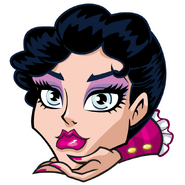 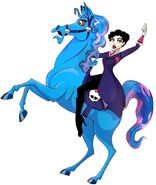 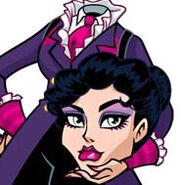