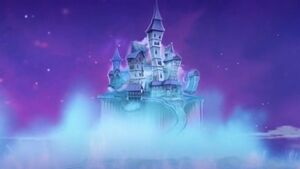 Haunted High is a high school located in the Ghost World. Evidently, it is only for ghosts, but it accepts ghosts of any kind. The building began as the home of Revenant who converted it into a school centuries ago and is its principal.

Before Haunted High was founded, the building it is located in was the house of Revenant, by few known to be the Red Lady, a notorious ghost who haunted the Monster World without compare. Eventually, she was incarcerated and forced to make up for her evil deeds with centuries of work. Distraught, the Red Lady thought up a different method to escape her bindings. She acquired a key that allowed her to transfer her chains to others and started Haunted High within her own house. Among the staff she hired, she recruited the Ghosts of Hauntings Past, Present, and Future as her personal army. She made them her Hall Moanitors and tasked them with handing out as many detention chains - her chains - as possible.

For a while, the punishments were limited, but they grew in intensity as Revenant became impatient and wished to be fully free. Haunted

Only a few students are confirmed to go to the school, other than the ones temporarily forced to transfer. The named five are:

Haunted High is a large white building with front doors that can be only opened by ghosts and ghosts easily phase through the door. Inside, a tower in the center of the lobby houses Principal Revenant's office. Bridges connect to take students around the school. The creepateria has tables and chairs that float above the ground, has a balcony, and a staircase. Principal Revenant's office has crimson walls and floor with portraits on the walls. There is a desk with a Crystal Ball on it. One room has a gigantic tank of water in it. The archives has records on every ghost in the Ghost World.

Add a photo to this gallery
Retrieved from "https://monsterhigh.fandom.com/wiki/Haunted_High?oldid=346127"
Community content is available under CC-BY-SA unless otherwise noted.