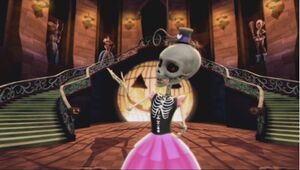 The Hall of Halloween Skeleton wears a black mini-top hat with a purple band around it. It is decorated with a purple heart and black swirl. Her dress is sleeveless with pink trim around the shoulders. The top part is black and displays a white spine and ribcage, along which six pink buttons are placed. The lower part of her dress is a four-layered pink shirt, of which the second and third layer sport black lace as trim. She does not wear shoes. 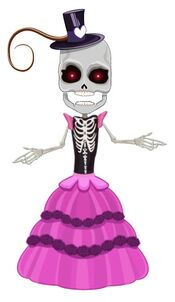 When later the Halloween party took place in the hall, the Hall of Halloween Skeleton appeared one last time to confirm things were now as they should be.

Retrieved from "https://monsterhigh.fandom.com/wiki/Hall_of_Halloween_Skeleton?oldid=343402"
Community content is available under CC-BY-SA unless otherwise noted.