Gory Fangtell[1] is a 2011-introduced and cartoon-only character. She is a vampire and a student at Monster High. She used to attend Belfry Prep before the school merged with Monster High and though the transition wasn't easy, no one would consider her and her fellow vampires not a part of the school these days. At Belfry Prep, Gory was a highly influential student and she continues to be so at Monster High, which occasionally causes her to clash with Cleo de Nile. Because she also has a mean streak to her, she and Toralei Stripe get along well. Gory is in a stable relationship with Bram Devein.

She is voiced by Cindy Robinson in English.

Gory is a vampire who possibly was raised in Transylvania, although she has a slight Southern accent. When she was about 1400 years old, a couple of hundred years ago, she saved an important vampire lord from sunburn, enabling her to have all her vampire powers. Frights, Camera, Action!

Eventually she studied at Belfry Prep and came across Monster High when the two schools merged.

Gory is a girl who knows her words. She is usually depicted as a bully because of her mean and obnoxious personality. She likes to mock the other students as she considers herself superior due to her vampire status and her status at Belfry Prep. She enjoys others' misery and is envious when she sees others succeed. Snobby and picky, she isn't hesitant to point out others' mistakes, and her patience is reserved if it involves things that aren't really significant. She is gentle in her speech, choosing the right words to express herself, usually her discontentment.

She has though expressed moments of kindness, like when she allows Ygor to assist with the film, uninvited.

Gory is a petite, curvy vampire with short black and violet angle-cut hair, burgundy eyes, pointed ears, and pale pink skin. She also has a beauty mark under the left side of her glasses under her eye. Her lips are a heavy color of red.

Sticking with the color scheme of the vampires who went to Belfry Prep, she wears a red collared v-neck with a sash or waist clincher and a striped necktie. She also wears a black skirt, glasses, a Belfry Prep pin, knee-high black socks, bat-winged heels, and a pair of bat-winged earrings, along with a black and plaid striped necktie.

As a vampire, she can typical powers:

Nothing is known except that her parents are vampires too. In a scene when there is a giant family tree of all vampires of the royal court, you can see Gory and who we assume to be her mother, and her father, who is one of the vampassadors. Frights, Camera, Action!

Gory is a leader figure among the Belfry Prep vampires and captain of their fearleading team. This brought about a rivalry with Cleo de Nile when Belfry Prep and Monster High merged, but the rivalry was eventually settled and temporarily morphed into a friendship.

While the Belfry Prep-Crescent Moon High conflict was ongoing, Gory and Bram took interest in Draculaura, seeking to get her to join their cultural group "Vampowerment". They took personal offense at her perceived abduction.

She dates Bram Devein. Between the two, Gory sometimes acts as a mastermind -equal and other times as the sly sidekick. She, however, only dates Bram in the webisodes.

In the TV specials prior to 13 Wishes, she is treated as a backgrounder, being paired with other backgrounders instead of Bram. 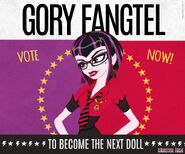 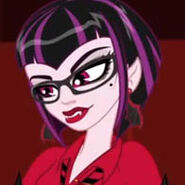