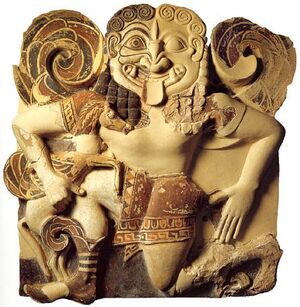 Gorgons are monstrous beings originating from Ancient Greek mythology. Gorgons have snake hair. The Gorgons were three monsters in Greek mythology, daughters of Echidna and Typhon, the mother and father of all monsters respectively. Their names were Stheno, Euryale, and the most famous of them, Medusa. In some interpretations Medusa was born human and was later turned into a gorgon by the goddess Athena, after what happened between Medusa and Poseidon. The defining ability of a gorgon is that their stare turns those who look at them to stone. In original Greek mythology, gorgons were precisely and exclusively female, as in, female creatures. In Monster High, they can also be male as well.

The Monster High gorgons are Deuce Gorgon, his mother Medusa, his aunts Stheno and Euryale and his cousin Viperine Gorgon.

Medusa was born a normie, it was the goddess Athena who changed her into this beautiful and passionate monster she is today. It's not mentioned if the incident with the god Poseidon happened in this storyline.

All known gorgons live on Petros Island in Greece.[1] "Petros" is Ancient Greek for "rock" or "stone".

Although in the Greek myth of Perseus and Medusa the reflection of a gorgon's stare had no effect, Deuce has been stoned three times by his own reflection: in "Freakout Friday" , "Escape From Skull Shores" and "Great Scarrier Reef (TV special).

In monster high there is also something called "Gorgon Powder", it can turn someone into stone, and reverse the effects of someone turned into stone.

The word "Gorgon" is of Ancient Greek origin, being Gorgō (Γοργώ, singular) and Gorgónes (Γοργόνες, plural) in standardized Ancient Greek. The term comes from the word "gorgos" (γοργός), which can be translated as "grim", "ugly", "fierce", and "terrible".

Traditionally, there are only three gorgons: Medusa and her sisters Stheno and Euryale. The meaning of "Medusa" (Μέδουσα) means "jellyfish", but generally taken to be "queen" or "guardian". "Stheno" (Σθεννώ) means "strength", while "Euryale" (Εὐρυάλη) means "far-roaming".

Gorgon Create-A-Monster
Add a photo to this gallery

Retrieved from "https://monsterhigh.fandom.com/wiki/Gorgons?oldid=346830"
Community content is available under CC-BY-SA unless otherwise noted.