Gooliope Jellington was trademarked on May 19, 2014 and her first doll came out in summer 2015. As of late 2017, her doll number totals 2 and makes up 1.00% of the entire Monster High doll collection. Other merchandise of her is not yet available.

Doll: This Gooliope has yellow eyeshadow under the crease and blood orange over it, as well as some circus inspired designs around her eyes, which consist of several dots and swirls, in black facepaint. With dark red lipstick, she also features yellow hair with pink highlights, cut by the shoulder and in curls. Gooliope is about 17-inches tall, with molded goo drops and new double joints.
Clothes: She wears a short, but elegant summer dress inspired by the circus tents with black and white shredded material as an underskirt and a black and white striped strand of material around her waist. The dress is cut around the bust and has two black straps holding it over the shoulders. The dress is mostly red, but the top features red and black stripes with golden swirls and the bottom has a mixed, almost random, and messy pattern of radioactive symbols, circus tent imaginary and red and white curtains.
Accessories: She wears a calliope headband in her hair, with pipes in golden and molded and painted piano keys, and the headband itself is like a golden twist braid. Her earrings are big, golden and shaped like wagon wheels. She also wears golden epaulet collar necklace adornment inspired by chandeliers and the ringmaster attire. The flats of the shoulder pieces have molded spider webs and the falling golden strands have swirls and studs. The part that goes around her neck also has swirls, framing it, as well as molded number 816, which also looks like the word BIG. She also comes with pinkish red platform shoes with circus inspired designs, like swirls, with a skeleton carousel horse for the heel. In front of the shoe there is a molded bow with a painted black skullette. The platform is meant to look like an stage.
Extras: A bigger black stand than usual and a diary.
Notes: 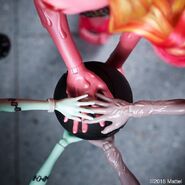 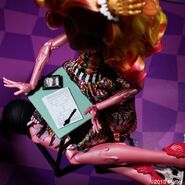 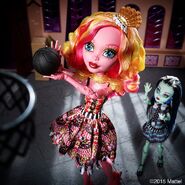 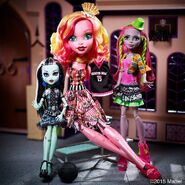 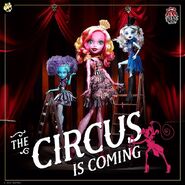 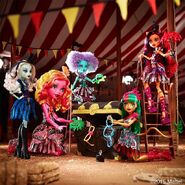 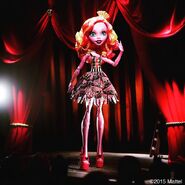 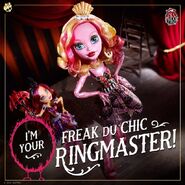 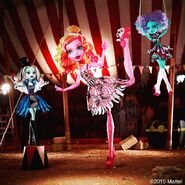 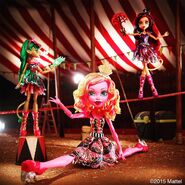 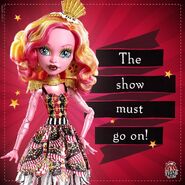 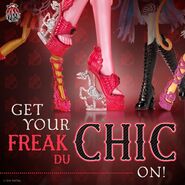 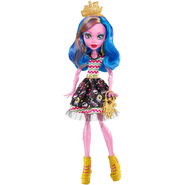 Add a photo to this gallery
Retrieved from "https://monsterhigh.fandom.com/wiki/Gooliope_Jellington/merchandise?oldid=343564"
Community content is available under CC-BY-SA unless otherwise noted.