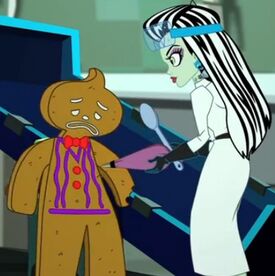 The "gingerbread boy" is a 2012-introduced and fiction-only character. He is a small living gingerbread man, created by Frankie Stein with the aid of Jackson Jekyll to be their Home Ick finals project. The project was a success, if with the downside that gingerbread boy's favorite food in the world is himself. He currently attends Monster High.

He is voiced by Audu Paden.

The gingerbread boy is a happy cookie, but he has a sweet tooth. Finding himself a particular delicious treat, he's not above sneaking a bite out of his own arm. He appears to be unable to feel pain.

He is a large gingerbread man, that has white frosting to form his mouth, nose, eye's, and eyebrows. There is red frosting that forms a bow tie and two buttons. He also has a purple frosting outline that forms a form of vest.

The gingerbread boy is seen talking with Invisi Billy and an ex-Belfry Prep student in "I Know What You Did Last Fright".

The gingerbread boy was one of the candidates of the speeddating session with Abbey Bominable in "A Perfect Match". Since Abbey had no date by the time he was longer in line, she likely rejected him.

In "No Place Like Nome", the gingerbread boy walks around in the halls of Monster High.

In "Home Ick" Frankie and Jackson create the gingerbread boy.

In "I Know What You Did Last Fright" the gingerbread boy talks with some other students.

In "A Perfect Match" The gingerbread boy was one of the many candidates of Abbey's speed dating but was likely rejected.

Retrieved from "https://monsterhigh.fandom.com/wiki/Gingerbread_boy?oldid=347570"
Community content is available under CC-BY-SA unless otherwise noted.