Dad says I'm 15 but he lost my birth certificate somewhere between the Darius the Great and Julius Caesar so I'm really not sure.

I wish I could name just one.

Gigi Grant is a 2013-introduced and all-around character. As a genie, Gigi has spent most of her life stuck in her lantern, waiting to be found and summoned to grant wishes. Ever since her shadow sister, Djinni "Whisp" Grant, has taken over her duties, Gigi has been set free to experience life outside of the genie sphere for a while. She is still uneasily getting used to her new environment, in which her wish-granting powers have been greatly diminished, but she's thrilled about the opportunity. Having spent so long making things happen for others, Gigi highly admires people who've made their own wishes come true, like Catty Noir.

Gigi is voiced in English by Jonquil Goode. In Freaky Fusion, she was credited under the alias “Joni Goode”.

In Latin American Spanish, she is voiced by Verania Ortiz.

Gigi is in existence for an unknown amount of time. Since she is a genie, she has been separated from her family, who she still keeps contact with, to serve as a genie in her very own lantern. Due to being kept in a lantern for so long, she doesn't know exactly how old she is, since her father (the Genie) lost her birth certificate a long time ago. She claims that she is 15 years old, though it's possible that she could be over 2,000 years old due to the hint that she existed between Darius the Great and Julius Caesar. There are conflicting sources on Gigi's area of origin. Some claim it is the Scarehara ​Gigi Conjures Up Harrowing Hairdo​, others the Far East. Gigi has had five known 'finders': chronologically a werecat/werewolf ghoul, a banshee girl, a ghoul of unknown species with blue skin, Fawn, and Howleen Wolf.

Gigi used to live alone in her lantern throughout her whole eternal life. She was lonely and miserable, her only joy being serving the 'finders' which was a rare occasion. Gigi forlorn for a friend and one of the brothers Grimm acknowledged her sadness. During sometime when Gigi's lantern was found again, Giles Grimm whispered into her finder's ears a suggestion for a wish: a friend for Gigi. After the finder's wish, Gigi's shadow was given life, turning into Whisp. Gigi was delighted with her new company and the two became close friends and even like sisters. But every time Gigi's lantern was found by a new finder, Whisp was left alone in the lantern and lurked through the shadows. Whisp did not like being ignored and especially disliked being left behind while Gigi left the lantern and made friends. Soon she grew jealous of Gigi with the desire to become a genie as well. When Whisp learned that she was not bound by the same rules as Gigi, she started to follow Gigi on her adventures and began whispering selfish wishes on the finder's ears to serve her own needs in revenge. When the brothers Grimm heard of this, they created a magical mirror that would reverse the effects of Whisp's manipulation. With this mirror, Gigi was able to save the finders from Whisp's control, until the mirror broke into 13 pieces during an eclipse, saving Fawn. Whisp, moved by fury of Gigi, hid each piece of the mirror after being pulled back into the lantern until one day when nothing could stop her, she would control the world and make everyone her friend.

Gigi's lantern was found by Howleen, and when Whisp tried to take control over her, her friends found every piece of the magic mirror, stopping Whisp. Howleen's last wish released Gigi from her lantern, so she could stay at Monster High, and to make Whisp the new genie of the lantern. She now studies at Monster High and makes effort to adapt in the world outside.

Gigi comes off as one of the sweetest ghouls in Monster High. She has a friendly nature as well as being kind and helpful to others as much as she can. However she tends to hide away when it comes to confrontations with other monsters (such as Toralei or Whisp). She's afraid of making severe mistakes at times as she knows their can be consequences. Gigi emphasizes in her profile that all her time spent in her lantern makes her claustrophobic. Also, in her diary, she shares how lonely she gets when she is trapped inside her lantern. She is still adapting to the real world (outside the lantern) and is shown to be afraid of her surroundings, mostly because she is afraid of the unknown. Her genie nature also makes her be very loyal and helpful, which sometimes turns against her when people abuse of her power and she is forced to obey. She is capable of making new friendships easily, but only when totally comfortable with it.

Gigi is a genie with pink skin and freckles across her nose. Her hot pink hair is styled like a scorpion's tail, and has a champagne gold streak running through the left side. Her arms and legs seem to have a scorpion-like segmentation on them. Her clothes consist of a half blue-half pink crop top. High-waisted black embroidered genie pants connect to the crop top. Her shoes are pumps. They are the same color of her hair and they curl upwards like an elf's shoe, which most genies wear as traditional shoes. A golden flower is in the middle of her foot, one on each foot.

As a lantern genie, Gigi holds various powers and abilities.

Her relationship with her family is unknown, but she is the daughter of the Genie or Djinni. She mentions of having a father, but there is no information regarding Gigi's mother. It is possible she was born without one. Gigi, regardless of the events that occurred, also still claims Whisp as her sister.

Howleen Wolf is the one who finds the lantern Gigi resides in, so they start developing a friendship. She finds it a little strange that she is developing a relationship with a 'finder' but enjoys Howleen's personality. She is also friends with her shadow-half Djinni "Whisp" Grant, who once tried to dominate the world. In her bio it states that she is friends with Twyla as well as Iris Clops with their shared passion for Astronomy. Gigi also seems to be good friends with Catty Noir as they both have common interest with each other in the New Scaremester diaries.

Gigi has no romantic pursuits, but is greatly admired by Finnegan Wake. It is unknown whether or not she knows of his crush or returns his feelings. In "Scareful What You Wish for", Heath Burns openly asks her out on a date but its unknown if she accepted. 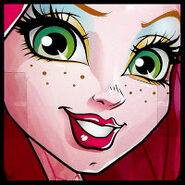 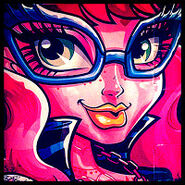 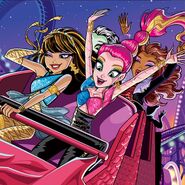 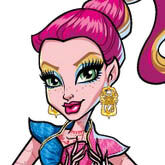 Add a photo to this gallery
Retrieved from "https://monsterhigh.fandom.com/wiki/Gigi_Grant?oldid=351563"
Community content is available under CC-BY-SA unless otherwise noted.