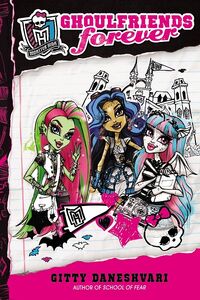 The Ghoulfriends book series, written by Gitty Daneshvari, is the second of the two book series attached to Monster High. It was first heard of on April 17, 2012 through Amazon, where the first book was put up for pre-order. The series was officially announced on August 13, 2012 as the Freaky Fab 13 entry of that month.

Unlike the Monster High book series, Ghoulfriends is aimed at middle-grade students rather than teens, and is set in the more familiar Monster High setting that is loosely shared by all other continuities. It focuses on the lives of new students Venus McFlytrap, Robecca Steam, and Rochelle Goyle rather than the usual main characters.

The following books make up the series: