http://www.amazon.com/Monster-High-Ghoul-Spirit-Nintendo-DS/dp/B005EW6CVK
Ghoul Spirit was announced for Nintendo Wii, DS and DSi at San Diego Comic-Con International 2011, where those attending could play a demo of the game. Ghoul Spirit was released on all three platforms at once in 2011 in each of the following regions: USA (October 25), Australia (November 10), and Europe (November 11). Ghoul Spirit was produced by ImaginEngine and distributed by THQ.

The game takes place in its own continuity, where the player assumes the role of a new female student at Monster High. This student can be customized by combining a number of premade trait options, such as facial design, skin color, and outfit. The goal of the game is to befriend the other students and earn the respect of the teachers to eventually become the Scream Queen at the Terror Under The Sea dance.

All three versions of Ghoul Spirit are the exact same game, though with accommodations made in response to the abilities and limitations of the platforms. The DS and DSi versions are identical, but the DSi version allows the player to take a photo of themself and use it to customize the avatar around.

The Wii version does not allow for a photo to be taken, but the console's larger processing power and the Wiimote's abilities makes for richer content. Unlike the handheld versions, the console version has students walking around the school, has a sign outside the school ground that is readable, and contains slightly more complex versions of some of the mini-games. When putting together the avatar, the Wii version also allows the player to select different color designs for the outfits, an option not offered in the handheld versions.

Ghoul Spirit starts with requesting the player to create their student avatar to navigate the digital Monster High with. Players can choose from a selection of six monsters - mash-up monster, vampire, werewolf, mummy, zombie, and gorgon - several facial design, several skin colors, several haircuts, two outfits, and in the Wii version several outfit color designs, to put together their avatar. A name also needs to be chosen, which can be one the player creates themself or selects from a generator.

Aside from the gameplay use, the diary also holds small notes on all 22 characters mentioned. Some of these reveal information found only in Ghoul Spirit, or at least at the time of the game's release. Each student also has a secret second note that needs to be unlocked with a code, though Spectra's is unlocked by default. Some of these codes could be found at the Monster High YouTube channel, which put up a Video Game playlist of eight shorts. At the end of these shorts, codes are given out. Clawdeen's code (1331) and the player's code (1333) unlock the Growlicious Pets Locker Sticker Pack and the Skull-Tastic Locker Sticker Pack respectively, while 1329 unlocks the Ghouls Rule Locker Sticker Pack and 1330 unlocks the Fab Pets Locker Sticker Pack and 1332 unlocks the Fear Squad Locker Sticker Pack, but the other codes unlock extra notes on the relevant characters. A particular oddity is Toralei's code, which upon entry claims a note for the Werecat Twins has been unlocked. This appears a leftover from an intent to give the Werecat Twins their own entry in the diary, which was scrapped before release.

The Nintendo Gamer issue of December 2011 gave the DS version of Ghoul Spirit a score of 50 out of 100. In general, the Wii version has received better appreciation than the DS an DSi versions.

At the Monster High pool with Clawdeen Wolf and Lagoona Blue

Different ghouls to choose from

Helping Draculaura with her make-up

In Coffin Corridor with Draculaura and her bat, Count Fabulous

A text from Clawdeen Wolf

In the Mad Science classroom with Mr. Hackington 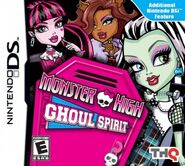 Nintendo Wii boxart
Add a photo to this gallery

Retrieved from "https://monsterhigh.fandom.com/wiki/Ghoul_Spirit_(video_game)?oldid=347244"
Community content is available under CC-BY-SA unless otherwise noted.