Garrett Sander is the Design Manager and creator of Monster High at Mattel.

He has worked for Mattel from January 2004 up to June 2018. He was also the Design Manager of Polly Pocket dolls during his time with Mattel. 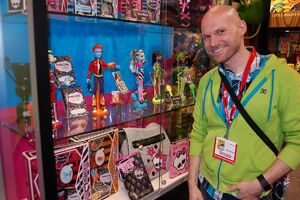 He has a fraternal twin brother named Darren, whom he credits with coming up with the catchphrase, "Freaky just got fabulous."[2]

Garrett also provided voice work where he voiced Velvet the Cat in Scaris: City of Frights.

The Black & White limited edition Frankie Stein doll credits him with the following on the back of the box:

"The mad scientist behind the creation of Monster High is better known as Garrett Sander to those around the lab. Garrett has worked at Mattel for 5 years, beginning his career in packaging, moving onto product design after Monster High was born. Garrett says, 'it has always been my dream to create a toy line and I couldn't be more proud of what came out of the lab. But it wasn't without the help of all the monstrously talented creatures at Mattel that truly put the spark of life into Monster High!'"

Retrieved from "https://monsterhigh.fandom.com/wiki/Garrett_Sander?oldid=347777"
Community content is available under CC-BY-SA unless otherwise noted.