A ghost cheetah would be my skultimate pet, because they're the fastest creature in the monster world...but they're too wild to be tamed.

Finnegan Wake is a 2013-introduced and all around character. He is son of mermaids and a student at Monster High. He loves extreme sports and any other activity that lets him live on the edge, but is often frustrated by others trying to get him to do something more peaceful. This is because he uses a wheelchair and therefore people see him as fragile and helpless. Finnegan is not one to put up with that, but he can forgive if the offenders recognize the error of their behavior.

If it isn't extreme and it isn't now, it has very little chance of getting Finnegan's attention. Adrenaline rushes are what he lives for and suggesting he should be more careful does little but seriously tick him off. He is, however, a loyal friend under his intimidating appearance.

Finnegan is an individual that values health too: he is fit and strong, and does the best for his metabolism, such as going for cardio exercises and making himself some healthy smoothies.

He needs a wheelchair due to a condition he was born with, a motor disability in his tail which he justifies as "I was just born this way. My tail just never worked." He isn't particularly awkward when talking about the situation, as long as people don't make less of him and when people make accusative commentary towards him, which he usually deals with brains over violence. Finnegan Wake's LS diary

He has blue skin, a dark blue tail, dark blue hair set in a mohawk, and blue eyes. He wears a yellow t-shirt with orange detailing, goggles, and sports tattoos on his arms, which he claims as a state of responsibility, and adds that they were indeed kind of painful to make. Finnegan Wake's LS diary His wheelchair is decked out with flaming skulls and his wheels are decorated with flames.

Finnegan considers Lorna McNessie one of his best friends, however the background behind this relationship is still unknown, possibly due to both being water creatures.

He is also close friends with Robecca Steam, a fellow daredevil with a passion for adrenaline and stunts, and he respects her and her "internal clock restriction". Finnegan Wake's LS diary

He also acquired a buddy in his local children's hospital, River, who has a motor disability that Finnegan can relate to. Finnegan was also the one who advised and convinced River to take physical therapy, leading to River's overcoming of his condition, leading to a close relationship between the two merfolk. Additionally, he is also close with Doctor J., a specialist therapist at said children's hospital.

Finnegan has a crush on Gigi Grant, a girl he didn't know or talk to until the two met at a cardio exercise, in the boardwalk. Since then the two have been close friends, though they're not in a romantic relationship. Finnegan finds her cute, attractive and cool, and the two can relate to each other, since Finnegan is bound to his wheelchair like Gigi was once bound to a lantern and its rules. 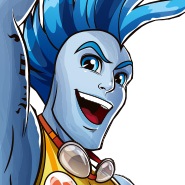 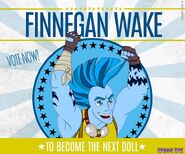 Add a photo to this gallery
Retrieved from "https://monsterhigh.fandom.com/wiki/Finnegan_Wake?oldid=344377"
Community content is available under CC-BY-SA unless otherwise noted.