Volume 2, Episode 3: Cleo orders the ghouls to cheer at every school event leading up to the big game. Will they knock 'em dead, or will heads roll when a Gloom Beach judge appears in the crowd?

With the fearleading squad re-established, Cleo is back to her demanding ways. She pushes them to do advanced stunts only to come to the conclusion they aren't ready yet for those. As warm-up to the bigger cheers, she orders the squad to cheer at every school event no matter how small. Their first cheer therefore is at the city chess championship. Slo Mo is thinking about his next move but Frankie, Draculaura, and Clawdeen's cheering distracts him. Frustrated, he crushes his key piece. Angered, the zombies come after the Fear Squad, but they flee in time. Next up is the cheer at the swim competition. Everything goes well until Clawdeen accidentally pushes Frankie into the water during a cheer and she electrocutes everyone in the pool. Finally, at a debate between Monster High and Belfry Prep, they keep interrupting the Monster High team, making the team unable to offer a rebuttal and thus causing Monster High to lose.

After all this, the Fear Squad gets another chance to show their skill at a big match: a casketball game. Cleo supervises them this time, who learns from Ghoulia that one of the Gloom Beach judges is among the audience that night. While waiting for another opportunity to cheer, Frankie notices that Heath to flirt with Draculaura, but Draculaura steadfastly ignores him, remarking she'd want Clawd to notice her. Frankie suggests they should make a pyramid with Draculaura on top to get his attention on her. Cleo protests, knowing they are not ready for a pyramid, but she is forced to be a part of it.

The Fear Squad actually pulls it off, but then Mr. Hackington comes by to sell blood sausages. Draculaura, who is extremely hemophobic, faints and falls off the pyramid right into Clawd's arms, knocking the ball out of his hands. Monster High thus fails to make the winning shot. The crowd voices its displeasure loudly and Draculaura walks off to cry alone. Heath Burns comes over, though, and makes fun of her humiliation. When Draculaura questions why she agreed to go to the dance with him, Clawd comes over and suggests she goes with him instead. Heath is easily intimidated away, and Draculaura happily accepts the invitation. But as Clawd leaves, Clawdeen approaches, not pleased that her best friend and her brother will go to the dance together.

Meanwhile, Frankie and Cleo talk about the Fear Squad's performance. Cleo is not pleased, but as she gets dramatic, she receives a text message. She passes the phone to Frankie, who reveals it reads: "We'll be in touch. Signed, Scary Murphy, Gloom Beach". 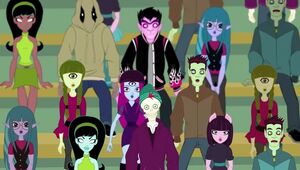 Retrieved from "https://monsterhigh.fandom.com/wiki/Fear-A-Mid_Power?oldid=332083"
Community content is available under CC-BY-SA unless otherwise noted.