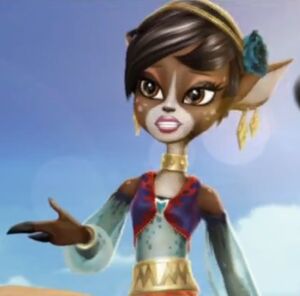 Fawn is a 2013-introduced and fiction-only character. She is an anthropomorphic deer of some kind who lived hundreds of years ago. She became one of Gigi Grant's finders one day and subsequently came under the influence of Djinni "Whisp" Grant. Gigi managed to save her, but all her wishes were made undone in the process. As a good-natured girl, she took it in stride.

In the English version, Fawn is voiced by Erin Fitzgerald.

Fawn is a sweet and down-to-earth girl, but naïve and not one to deal with stress very well.

Fawn has dark brown skin with white spots and freckles, while her eyes are brown and her hair is short and deep brown in color. She has only three fingers on each hand: two "hoof"-fingers and a "non-hoof"-thumb. She wears colorful and comfortable clothes as well as plenty of jewelry.

For the short time they've known each other, Fawn and Gigi enjoyed each other's company. Going by Gigi's claim that Howleen is different from the other finders because she has friends, Fawn's circle of friends likely is small.

Retrieved from "https://monsterhigh.fandom.com/wiki/Fawn?oldid=349566"
Community content is available under CC-BY-SA unless otherwise noted.