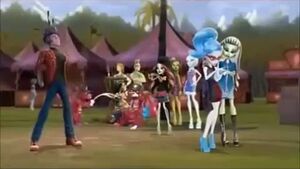 Fangladesh, also known as Bangladesh, is one of the smaller countries of South Asia. It is bordered in the north by the Himalayas.

When Clawdeen's sketchbook escaped the watchful eye of Frankie Stein, she and her friends present at the time went after it, which led them to an airport in Fangladesh. They found the sketchbook among the unclaimed baggage, but before they could get, a stampede of monstrous elephants crashed the party, and dragged some of the baggage along including the sketchbook. The group had to venture after them into the jungle and take the sketchbook back once the elephants slept. This seemed to be the end of the quest, but a large bird of prey grabbed the bag from Cleo de Nile and flew off. On Deuce's advice, the group returned to the airport and bought itself two balloons to follow the bird with. From Fear to Eternity

Retrieved from "https://monsterhigh.fandom.com/wiki/Fangladesh?oldid=349025"
Community content is available under CC-BY-SA unless otherwise noted.