Princess Fangelica VanBat is a 2017-introduced and all-around character. She made her first animated appearance in Calling All Ghouls. She's the sister by affiliation of Draculaura. She was born on October 11th, according to the Junior Reader's book; Fangelica's Fangtastic Friends. Although she was born to the royal VanBat family, Dracula took her in and adopted her. It is currently unknown what happened to her birth parents.

In English she is voiced by Cristina Milizia. She was supposed to be voiced by the late Hiromi Hayakawa in the Spanish language, but due to Hiromi's passing; she has yet to receive a voice actor for the Spanish version of the series and thus, has not yet appeared in the version of Spanish speaking countries.

Fangelica is the lost VanBat princess who was orphaned or abandoned by her parents. She has been living in a booby-trapped castle alone for centuries until the Ghoul Squad comes to her rescue.

At first she is very shy, not revealing herself to the rest of the Ghoul Squad, but after seeing Clawdeen and Draculaura preform the secret vampire handshake she quickly makes friends with all of the ghouls at Monster High. Since she is younger than most of the other students, she seems to have a large curiosity in the customs of these teenagers.

She is a lot younger looking than the rest of the ghouls. She is shorter and has pale pink skin (somewhat darker than her sister’s) with a pair of large purple eyes. Unlike any other vampire in-universe (except Batsy Claro), she has bat wings and ears at all times, probably justified as a symptom of her younger age and therefore unexperience with vampire powers (be noted that she can, however, fully transform into a bat at will).

She wears a small blue winged heart tiara over her ponytail, a turquoise tank top with a pink furry collar, a purple bat-print skirt, and black bat-themed sandals that show off her multicolored toenails.

Fangelica possesses most of the same abilities as other vampires.

In Adventures of the Ghoul Squad, she previously lived with an unnamed mother and father, who were royalty. Their wherabouts are unknown, although she is assumed to have become an orphan. In the Monster Family line she is presented as the adopted daughter of Dracula. 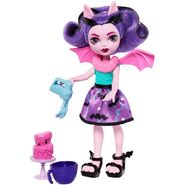 Add a photo to this gallery
Retrieved from "https://monsterhigh.fandom.com/wiki/Fangelica_VanBat?oldid=349833"
Community content is available under CC-BY-SA unless otherwise noted.