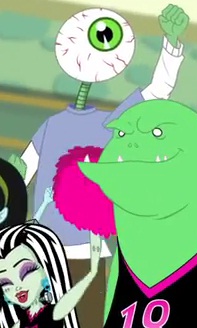 Eyera is a 2011/2013-introduced and cartoon-only character. He is a creature with a giant eye as head and a student at Monster High.

In English, Eyera is voiced by Ira Singerman.

Eyera has a green body, with a giant eyeball instead of a head. His eye color is green. In the 2D material of the cartoon, he wears baggy beige pants, and a white sweater with a blue T-shirt over it. In the 3D material, he wears a generic Monster High jacket ensemble.

Nothing is known about them, except that at least one of them is an eye creature.

Eyera was one of the candidates of the speed-dating session with Clawdeen Wolf in "Ghouls Rule", but he was rejected like all other candidates. A bewitched Howleen Wolf kissed him in "Why Do Ghouls Fall in Love?", but it's unknown what he thought of that.

Eyera is a backgrounder, but one of the three 3D TV specials has taken a shine too. He first showed up in Volume 2's "Fear the Book".

He waits in line for Cleo to sign his copy of the fearbook. Fear the Book

In "Scare-born Infection", after Howleen passes the cooties to Romulus, he watches as Romulus passes them to Jackson.

He is seen with everyone counting down as the new year comes. Boo Year's Eve

In "These Boots Were Made for Rolling", he makes a cameo at Monster High, and cheers for the monster high SKRM team.

Retrieved from "https://monsterhigh.fandom.com/wiki/Eyera?oldid=344000"
Community content is available under CC-BY-SA unless otherwise noted.