I am working on a pet for the future, but she is still in beta.

Elle Eedee is a robot and a 2015-introduced character that appears in the TV Special Boo York, Boo York. She is the daughter of The Robots who is looking to aspire in her career as a DJ and she seems to be a premature robot who is still under construction, in need of an upgrade once in a while. She usually buys new pieces and upgrade parts and her parents help her out. Although she adores music, especially composing, and fun, she has a hard time when dancing due to an anomaly in her system. She's missing a cool-up module without which she cannot move too much or else she will get amped and will need to be fixed.

In English, Elle is voiced by Laura Bailey.

Elle is a fun-loving ghoul who really enjoys music, and she claims that she always has been a loner kind of girl, preferring to stay with herself to do her own things, and she is also skilled in mechanics as she is building herself a pet.

Elle has silver "skin" with a robotic texture, violet eyes that resemble focus lenses, lilac eyebrows, long blue and violet hair tied in a ponytail, and markings on her face, including an on and off button on her forehead and markings that resemble pieces of a robot. She also has round speakers for ears.

Elle builds a friendly relationship with Mouscedes King and Luna Mothews right after meeting them during the Comet Gala in Boo York.

Elle is the daughter of The Robots, and it is implied she was constructed by them rather than naturally born from them. She has a great bond with her mother, who she calls motherboard, and she also claims she comes from a long lineage of Robots. 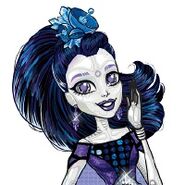