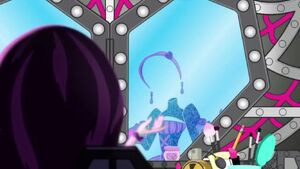 Elissabat debuted in the cartoon series in the Volume 3 TV special "Frights, Camera, Action!", which premiered on March 11, 2014. She is voiced by Karen Strassman in the English version of the cartoon.

Elissabat's childhood freedom comes to an end with the disappearance of her father, which makes her uncle, Lord Stoker, her legal guardian. He forbids her a lot, but things get even worse when they learn that Elissabat is chosen by the Vampire's Heart to be the new Queen of the Vampires. Stoker seeks to control her so he will be the effective ruler of the vampires, leaving her just a puppet queen. Knowing neither she nor Dracula, her father's best friend, can fight him, Elissabat takes the Vampire's Heart and flees Transylvania to reach Londoom, from where she travels on to New Goreleans. There, she leaves the Vampire's Heart in the care of Hexiciah Steam to free herself fully and moves on to Hauntlywood to become an actress like she always had wanted to. Her efforts aren't in vain, as she becomes the star of the Vampire Majesty movies under the alias Veronica Von Vamp. She remains in hiding for four hundred years until Stoker tries to make Draculaura take Elissabat's place as queen in name only. This prompts Draculaura to search for Elissabat and get her to accept queenhood. Elissabat refuses at first, but when she sees the danger Draculaura and many others are in if Stoker has his way, she stands up to Stoker and agrees to be queen. To further that, she punishes her uncle by banishing him from ever holding official office again before having her security guards drag him off the boo-vie lot. And contrary to what Stoker convinced her of, Elissabat is able to be both a good queen and a dedicated actress. In fact, she has the next Vampire Majesty movie made at her old home, Castle Dracul, with a new crew consisting of people who helped make her coronation possible. Frights, Camera, Action!

Everyone at the premiere of the new Vampire Majesty movie is eager to see Veronica's acting. Welcome to Hauntlywood

Elissabat has to acquire experience as a regular high schooler for her next movie role, so Draculaura invites her to come spend a week as a student at Monster High. She and Viperine consider the idea a good one, but Elissabat has to go incognito if she wants to be treated as a regular high schooler. For this, Viperine works out a disguise involving a wig and glasses.

The plan proceeds well enough at first and Elissabat has a blast as a regular student. Though Draculaura invited her, the two have different schedules and only have a few moments to hang out. Having a reputation for being a terrible gossiper, Draculaura has to promise to keep Elissabat's secret when apart. Nonetheless, she can't keep prevent herself from telling Clawd. She insists he doesn't tell anyone else, which he agrees to. However, the presence of a famous movie star makes Clawd nervous and limits his performance potential during the next casketball match. While apologizing to the rest of the team, Clawd accidentally spills the beans about Elissabat.

It doesn't take long before the entire school knows that the new girl is actually a Hauntlywood celebrity and Elissabat soon has to run from her over-enthusiastic fans. Draculaura understands Clawd did not keep quiet as he had said he'd do and volunteers him to be dressed up in Elissabat's disguise and distract the crowd of fans. With Viperine's makeup artist skill, the plan is a downright success. Master of Hiss-guise

Elissabat hides her letter to Dracula

Elissabat prepares to take the Vampire's Heart with her, knowing it is the only link to finding her

Elissabat takes the Vampire's Heart with her to avoid being found

Opening the secret passage to make her escape

Elissabat knows she can't turn back now. Her mind is made up.

Elissabat gives the Vampire's Heart to Hexiciah, allowing her to move on with her life and flee to Hauntlywood

Veronica heading back to her trailer after speaking with Scareantino

"Sorry, you're looking at a fake. This is Hauntlywood. It's only a prop."

"Well, I can always sign an autograph for a fan."

Veronica being prepped by Viperine. "Now, you tell me: Why are you looking for it?"

"What if she doesn't want to be the Queen?"

"If Elissabat were here, she would probably say that she is just one ghoul, nothing special."

"And maybe, she thinks she doesn't have what's needed to be Queen."

"Look. I want to help, really I do. But...I promised Elissabat...that I would keep her secret."

Elissabat worried by Draculaura's refusal to give up on finding her

"Elissabat disappeared a long time ago. I want to help, but..."

"And what gives you the authority?"

"And I am Veronica Von Vamp. Boovie Star."

"And you are in my studio!"

"Well then. It is long overdue."

"You will not use that tone on my set! Guards!"

"It is time. The vampires need their real Queen, Elissabat."

"I remember Elissabat who, more than anything, wanted to act."

"Only on stage and in her imagination, did she have the strength to lead."

"But my friend Draculaura, has reminded me that you need to have courage to face your fear."

"To overcome it. To help others."

Elissabat removes her wig to let her hair out

Then puts her old glasses back on

"Lord Stoker! For your crimes against the Vampire Crown, you are banished from ever holding official office!"

"Show him the street."

"Tonight is my new boovie premiere."

"It will also be my coronation."

"And you're all invited!"

Elissabat asks Hoodude to be her date for the boovie

Elissabat makes her award acceptance/coronation speech to the crowd, including the Vampire Dignitaries

Elissabat is crowned the new Vampire Queen by the Vampire Dignitaries

Draculaura and Elissabat head in to the theater together

"I can't wait to make the next sequel at Castle Dracul..."

"With my new screenwriter..."

Everyone watching Elissabat's latest Vampire Majesty boovie
Add a photo to this gallery
Retrieved from "https://monsterhigh.fandom.com/wiki/Elissabat/cartoon?oldid=348515"
Community content is available under CC-BY-SA unless otherwise noted.