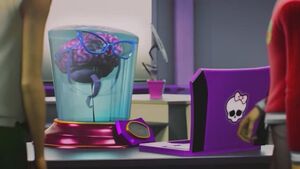 Dracula's secretary is a 2016-introduced and fiction-only character. She's a living brain of unknown origin held afloat in a glass container who communicates by means of a speaker at the base of the container. She works as Dracula's secretary and is popular with the zombie population of Monster High.

She is voiced by Julie Maddalena Kliewer.

She's to the point with a touch of sarcasm when the situation calls for it.

The secretary is a disembodied brain who uses a glass container as vessel. The container comes with a purple speaker at the red-brown base, through which she can make herself be heard. Despite not having eyes or ears, she wears blue horn-rimmed glasses.

Due to being a brain on display, the secretary gets her fair share of attention from the Zomboyz. Of course, she refuses it, Electrified but she finds it endearing nonetheless. Welcome to Monster High

During work hours, the secretary gets to inform Dracula that Gob has gotten himself stuck inside a vending machine. Some time later, she attends the Dance the Fright Away party and accepts to get her picture taken with several Zomboyz. Welcome to Monster High Some months later, two of them try to flirt with her, which she has to reject. Conveniently, Moanica barges in to call them away for one of her plans. As the boys dejectedly leave, one of them quickly tells the secretary to call him. Electrified

Retrieved from "https://monsterhigh.fandom.com/wiki/Dracula%27s_secretary?oldid=346005"
Community content is available under CC-BY-SA unless otherwise noted.