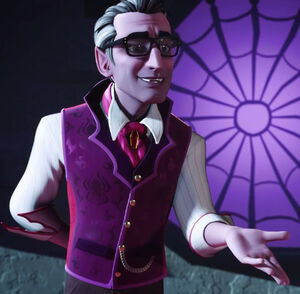 Count Dracula, or simply Dracula is a well-known vampire count and the adoptive father of Draculaura. He is mentioned in several books, diaries and movies, but his first on-screen appearance is in Welcome to Monster High. He teaches Humanolgy and he's the Principal of Monster High as he seems to replace Headless Headmistress Bloodgood. According to Draculaura's 'School's Out' diary, he reveals that he is not the Dracula who Bram Stoker wrote about.

Dracula is voiced by Michael Sorich.

Count Dracula, simply Dracula, or Draco as he was known centuries ago, is an ancient vampire who once served Julius Ceaser as the commander of a special 'night guard' who aided in Ceaser's conquest of Gaul. Despite his reputation, which he earned thanks to a pretender, Dracula is far from the evil being most people perceive him as. While he is incredibly stern and intimidating, he is also a great believer in monster equality and is a close acquaintance of many outside the vampire community. He does, however, still believe in the classic vampire traditions such as drinking blood and only going out at night, which causes friction with Draculaura, who believes in exactly the opposite. He is willing to tolerate their differences for her sake most of the time.

In the "Monster High book series", Dracula is a successful businessman who uses his wealth to provide safe homes and identities for the other monsters in Salem, and even plans to build a new school for monsters only. He is often referred to as "Mr. D" by the other monsters.

In the "Ghoulfriends" series, Dracula was once a member of ASOME, a society who believes themselves superior to other monsters. But after realizing that the group's ideals were wrong, he decided to leave and, along with other monsters, set up the Society of United Monsters to stop ASOME's plans and promote monster equality, which led to the creation of Monster High.

In "Welcome to Monster High", Dracula is quite adamant about keeping hidden from humans, as he fears that they might turn on monster kind as they have done in the past. As a result, he and Draculaura have remained isolated from others for several years. When Draculaura suggests turning their mansion into Monster High, he is quite reluctant about having other monsters under their roof. But he soon warms to the idea, and becomes Monster High's headmaster.

Dracula takes the traditional all-black look seriously. He wears fine, Victorian clothes and a large cape. In the book series, Dracula is described as having a somewhat overdone tan, and wears modern, regular clothing. He is also shown dressed in all-black in a picture in "Frights Camera Action!".

In the new Monster High reboot, Dracula wears a white shirt with a dark-pink vest and a pink tie, brown pants with pink socks and black-pink shoes, and glasses.

Being a vampire, Dracula has the ability of any other vampire:

Dracula is the adoptive father of Draculaura whom he took in many centuries ago. While he loves her dearly, he regularly disagrees with her regarding her choices to avoid drinking blood and be a vegan. Every year on her birthday, he attempts to talk to her and convince her to be a more traditional vampire, but she simply kisses him on the cheek to disarm him, and he decides to let it go for another year. Nonetheless, he does occasionally help her out with her vegetable garden. Draculaura Batty for Fall Veggies

In the Monster High book series, Dracula and Draculaura's relationship is even more strained, with Dracula usually away on business for long periods and rarely talking to her, and Draculaura struggling to meet his high expectations for her. This comes to a head when Dracula plans to create a monster-only school just as the monsters have become accepted at Monster High. Eventually the two reconcile and promise to work on their relationship, with Dracula admitting that he finds it difficult to talk to her as she reminds him so much of his late wife…

Dracula also has a younger brother named Vlad, who looks after his affairs while he is away on business. Vlad is a much friendlier and social vampire than Dracula, and maintains a close, paternal relationship with Draculaura. He often annoys his brother with his attempts to make Dracula lighten up, such as suggesting he repaints his house in more vibrant colors or take up fung-shui.

Dracula was the best friend of Elissabat's father before he disappeared and it's that friendship that motivated him to try and protect her from her uncle, Lord Stoker. He is also a close friend of Hexiciah Steam, Robecca's father.

Dracula once fell in love and married Camilla, a woman who married a centurion whose great-great grandfather once served along Dracula. When her husband was killed in battle and she was left with no support for her and her unborn child, Dracula offered to give her a home. She became the head of his household, and eventually she and Dracula fell in love. When her child was born, she named her Draculaura in honor of her benefactor. Tragedy struck however, when several years later she died from a plague. Dracula was forced to turn Draculaura into a vampire to prevent her from succumbing to the same fate.

In "Welcome to Monster High", it is shown or hinted, that he has a romantic interest in Harriet Wolf.

In the book series by Lisi Harrison, Draculaura's mother is named Alina.

In the Monster High Diaries series, Dracula meets and falls for a vampire named Ramoanah, who shares his views on monster equality, and the two decide to get married shortly after. 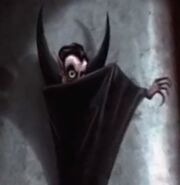 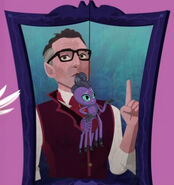 Add a photo to this gallery
Retrieved from "https://monsterhigh.fandom.com/wiki/Dracula?oldid=353712"
Community content is available under CC-BY-SA unless otherwise noted.