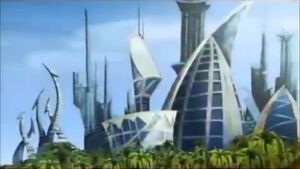 Doombai, also known as Dubai, is the capital city of the emirate of the same name, which itself is located in the United Arab Emirates.

On the hunt for Clawdeen's sketchbook, Frankie Stein, Jinafire Long, Ghoulia Yelps, Abbey Bominable, and Heath Burns arrived in Doombai. They tracked the sketchbook to a pile of baggage that was to be loaded on a ship, but they arrived at the harbor too late to get on the ship themselves. As such, the group got itself a rowboat to continue their pursuit.

Retrieved from "https://monsterhigh.fandom.com/wiki/Doombai?oldid=285616"
Community content is available under CC-BY-SA unless otherwise noted.