Don of the Dead is a 2011-introduced and cartoon-only character. He is a zombie and a student at Monster High. Don forms a trio of close friends with Ghoulia Yelps and Sloman "Slo Mo" Mortavitch.

Don, like most zombies, is a gentle, smart, but slow individual. He likes sports and chess. He has a crush on Ghoulia Yelps.

He has pale green skin, short purple hair, and eyes that are usually unfocused. He wears a dark blue shirt with a light blue zero on it, and he has on a pale blue under shirt.

Don is a close friend of Slo Mo and can usually be found near him. He is also a good friend of Ghoulia's, for whose affections he has a small rivalry with Slo Mo. 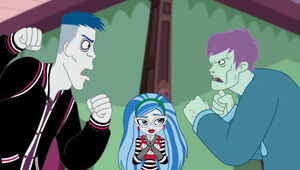 In "The Bermuda Love Triangle", Don and Slo Mo got into a fight over Ghoulia. Since Ghoulia was flattered by it, it seems she sees him as an alternative worthy of consideration. The outcome of the fight is unknown, but Ghoulia was confirmed to be still with Slo Mo in "Monster Mashionals Part 2". Nonetheless, in Volume 3, Don was still flirting with her alongside Slo Mo, and it was a problem for Ghoulia in "Why Do Ghouls Fall in Love?" that she didn't know whether to pick Slo Mo or Don as her date for Draculaura's Sweet 1600.

Don started out as a backgrounder when he debuted early in Volume 2. In this capacity, he appears in "Fear-A-Mid Power", "Varsity Boos", "Falling Spirits", "Fatal Error", "Daydream of the Dead" and "Ghosts with Dirty Faces".

In "The Bermuda Love Triangle", Don fought Slo Mo to win her heart. Ghoulia was flattered by this.

Don and his zombie peers were made to serve the Belfry Prep vampires once their school and Monster High merged. The vampires eventually came to respect them as friends.

In "Zom-Beach Party", Don and Slo Mo checked out Ghoulia while she was showing off her archery skills. 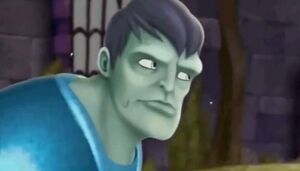 In "Dodgeskull", Don and Slo Mo wanted to participate in a game of dodgeskull, but were derisively told by Manny Taur and the others that zombies were unfit to play. Ghoulia stood up for them and challenged Manny to a game of dodgeskull, which would decide whether he or she would be the dodgeskull captain for a whole year. Ghoulia won the zombies the game, guaranteeing Don and Slo Mo could play dodgeskull to their heart's content for a whole year.

Don was electrified by Frankie Stein in "Uncommon Cold" when the disease she caught made her powers go haywire.

Retrieved from "https://monsterhigh.fandom.com/wiki/Don_of_the_Dead?oldid=344304"
Community content is available under CC-BY-SA unless otherwise noted.