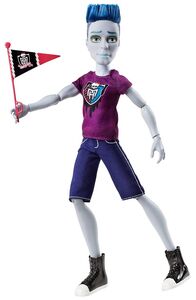 2014 was marked by three big changes in the doll setup. The first of these concerned the 'Signature' line, which after four years came to an end. Its first successor was Monster Exchange, a line that expanded the world of Monster High by having old characters cross borders and new characters come visit Monster High. The second change is a development in the store-exclusive distribution, which became more isolated. In previous years, store-exclusive items tended to be part of regularly available doll lines. In 2014, most items were a line on their own, complete with a distinctive and trademarked name. And related to this is the third change, which is an extra way new characters joined the cast. In addition to 'Signature' lines and TV special tie-in lines, characters with an established fictional presence sometimes became introduced in store-exclusive multipacks. The result of this was another increase in the yearly amount of new characters and unlike previous years, none of them had a second doll in 2014. The one who comes closest is Sloman "Slo Mo" Mortavitch, whose debut doll hit stores in 2013 but with the wrong hands. The doll with proper hands did not become available until 2014.

In total, 2014 saw releases in thirty different lines, of which twenty-one new, for a total of 77 items. There were fifteen new characters introduced and nineteen store-exclusive items released.

We Are Monster High

A Pack of Trouble

Retrieved from "https://monsterhigh.fandom.com/wiki/Dolls/2014?oldid=336794"
Community content is available under CC-BY-SA unless otherwise noted.