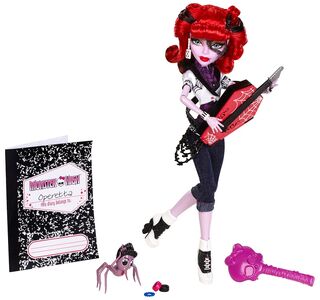 In 2012, Mattel made the marketing of the Monster High assortments a tad more professional in that the four big lines of 2012 all were attached to a well-hyped TV special. The 2011-introduced system of producing USAmerican store-exclusive dolls continued and even expanded, adding Costco, JCPenney, Kmart, and Kohl's to the list. On the downside, 2012 was the last year to contain fashion pack releases. Notably, 2012 saw a boost in new faces compared to what 2011 had added, of which Operetta was marketed most.

In total, 2012 saw releases in twenty different lines, of which fourteen new, for a total of 89 items. There were twelve new characters introduced and twenty store-exclusive items released.

My Wardrobe and I

Retrieved from "https://monsterhigh.fandom.com/wiki/Dolls/2012?oldid=336769"
Community content is available under CC-BY-SA unless otherwise noted.