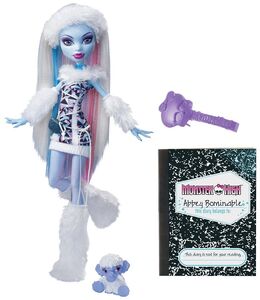 Flowing from the 2010 success, if after a drought of half a year, 2011 upped the Monster High doll output dramatically. 2011 was the year that introduced dolls exclusive to certain stores in the USA, the first three such being: Target, Toys"R"Us, and Walmart. Of the 2010 introducees, Ghoulia Yelps and Draculaura greatly caught up, while new face Abbey Bominable made a solid start.

In total, 2011 saw releases in fourteen different lines, of which ten new, for a total of 46 items. There were six new characters introduced and four store-exclusive items released.

Day at the Maul

Retrieved from "https://monsterhigh.fandom.com/wiki/Dolls/2011?oldid=336756"
Community content is available under CC-BY-SA unless otherwise noted.