Meet the frighteningly fashionable teenage children of the world's most famous monsters! They've left their parents' outdated haunting habits behind as they figure out the horrors of high school. With their killer style and fiercely loyal friends, you'll see them and scream "Drop dead... gorgeous!" 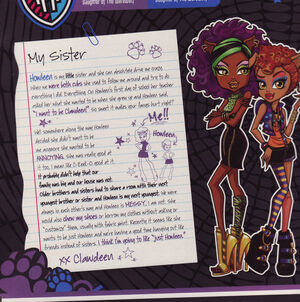 My sister
Howleen is my little sister and she can absolutely drive me crazy. When we were both cubs she used to follow me around and try to do everything I did. Everything. On Howleen's first day of school her teacher asked her what she wanted to be when she grew up and Howleen said, "I want to be Clawdeen!" So sweet it makes your fangs hurt right?

Well somewhere along the way Howleen decided she didn't want to be me anymore she wanted to be ANNOYING. She was really good at it too, I mean like C-Eeek-O good at it. It probably didn't help that our family was big and our house was not. Older brothers and sisters had to share a room with their next youngest brother or sister and Howleen is my next youngest. We were always in each other's way and Howleen is MESSY, I am not. She would also chew my shoes or borrow my clothes without asking or "customize" them, usually with fabric paint. Recently it seems like she wants to be just Howleen and we're having a good time haning out like friends instead of sisters. I think I'm going to like "just Howleen."
XXX Clawdeen

Unlike previous main sublines, not every doll has its own diary; Meowlody and Purrsephone share a diary and Clawdeen lacks one altogether. This leaves five 'Campus Stroll' diaries, which detail the months of the summer vacation a year after the ones spoken of in the 'Basic' diaries, ranging from late July to the end of August. The date noted in everyone's diary is August 31, when a meteor shower occurs.

Most space on the back of the box is taken up by the characters' profiles, the ones that can also be found on the Monster High website.

Meet the frighteningly fashionable teenage children of the world's most famous monsters! They've left their parents' outdated haunting habits behind as they figure out the horrors of high school. With their killer style and fiercely loyal friends, you'll see them and scream "Drop dead... gorgeous!"

The diaries that come with the 'Between Classes' dolls detail the early months of the school year one year after the ones spoken of in the 'School's Out' diaries, ranging from early September to mid-November. The date noted in everyone's diary is November 15, when several students are volunteered to help with the middle school carnival fundraiser.

Most space on the back of the box is taken up by the characters' profiles, the ones that can also be found on the Monster High website.

Where do background characters go once they've passed through a scene? Why to their lockers of course. That's where Scarah Screams and Hoodude Vooodoo struck up an unlikely friendship that has continued to grow during their time together off screen. Of course at first glance it may not appear that the daughter of the Banshee and a living voodoo doll would have much in common, seeing as how Scarah can read minds and he doesn't really have one. Turns out that Hoodude's a really good listener though and what ghoul doesn't need that from time to time?

So Skull Shores is totally creepy cool! The weather is awesome, the beaches are to die for, the water is crystal clear and I've got friends here to share it. It would all be perfect except for the enormous statues on the island that kind of look like...me.

They're kind of creeping me out and not in a good way. - Frankie

A midnight movie theatre is screaming an old scary human movie and Toralei has the purrfect fashion to check it out. Hope her curiosity doesn't cause a hair raising situation.

Cleo de Nile isn't wrapped up in beauty, beauty is wrapped up in her. This doens't mean she isn't looking to enhance her already regal appearance. Of course while she's out looking she wants to make sure every monster is looking at her. These fashions should make that happen.

Information is where you can find it and Spectra Vondergeist knows that while you're out looking for it, one's fashion should reflect the seriousness of the search. There's more than a ghost of chance she'll get back to you about anything she finds.

Main article: Scarily Ever After

Each of the Scarily Ever After dolls comes with a fairytale storybook featuring the respective character. The Monster High fairytales are adaptions of real-world fairytales, adjusted so as to incorporate the monster elements of the protagonists. Each fairytale is written in rhyme, but the rhythm of the rhyme differs between each.

The ghouls from Monster High are haunting to The City of Frights for an international fashion competition where the winner will become THE apprentice to world famous designer Madame Ghostier. It is the chance of an unlifetime... or is it? Follow our ghouls above and below the cobblestone streets as they cheer on old friends, make new ones and discover that not everything is always as it screams.

The six deluxe dolls of the Scaris: City of Frights each come with a booklet that has either one of three functions, but in general the collection can be considered one of sketchbooks. Skelita's, Jinafire's, and Clawdeen's have diary portions in them, and Rochelle's and Frankie's are vacation albums.

I really love my class. It's hard but it helps with me balance, strength and flexibility. It's kind of like surfing, except instead of hanging ten I hang toe!  (Lagoona Blue)

In order to expand my horizons I have decided to take a tap class. Well, maybe it is not so much expanding as it is having an alternate dance step to try out at parties. One does so tired after being asked do "the robot". (Robecca Steam)

I'm usually playin' music instead of dancin' to it so I decided to take this class. Now don't get me wrong, I can reckon there's nothing wrong with learnin' something new especially when it's this much fun. (Operetta)

Hip Hop class is creepenfically crunk and I can't believe it took me so long to sing up. I've totally got this new routine I've working on but I'm waiting 'till full moon to bust it out. It's fixing to get epic up in here. (Howleen Wolf) 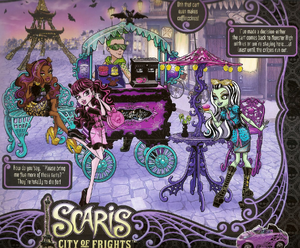 What could be better that sitting outdoors at a petit cafe in The City of Frights sharing an éscare or perhaps a strawscary crêpe with your best ghoul friends in the world? While you're thinking of an answer pull up a rot iron chair and take in the sights ans sounds of Scaris from the beast seat in the house. You're probably getting hungry- just make sure you order something to share.

Retrieved from "https://monsterhigh.fandom.com/wiki/Doll_logs/2012?oldid=305030"
Community content is available under CC-BY-SA unless otherwise noted.