Gigi says she's 15, and since I'm technically the physical manifestation of her shadow, I'll go with that.

When I was wished into existence as a shadow djinni, a shadow pet didn't come along with it, so I'm not sure what kind of pet I'd want although I've heard flying monkeys are kind of pretty cool.

Djinni "Whisp" Grant is a 2013/2015-introduced and all-around character. She is the manifestation of the shadow of Gigi Grant, created from a wish for a friend to keep her company by one of her finders, and acts as Gigi's sister. She was known as the Shadow Genie, but following a wish to turn her into a true genie, she has lost the shadow aspect. Djinni and Gigi have a difficult history, but ever since Whisp became a true genie and has taken over Gigi's duties, getting the spotlight she's always wanted, they've been working on repairing their sisterhood. Whisp is an experienced manipulator and both merciless and creative in obtaining her goals, but she's trying to reform.

Whisp is voiced in English by Jonquil Goode.

Whisp started out as the literal shadow of Gigi Grant. She was brought to life during an eclipse by a wish made by one of Gigi's finders who, by the idea of Giles Grimm, wished for her a permanent friend. Gigi and Whisp were very good friends, sisters even, at first, while they were alone in the lantern. However every time the lantern was found, Whisp was left alone. Whisp did not like being ignored and especially didn't like being left behind while Gigi made new friends. Seeking revenge, she learned that she was not bound by the rules of lantern. She started to follow Gigi on her adventures, manipulating the finders to serve her own needs of retribution. When the Brothers Grimm found out about this, they created a magical mirror that would cancel the effects of Whisp's whispering powers. Gigi used the mirror to save Fawn and thwarted Whisp's plan for domination, but the mirror broke into thirteen shards as a result for breaking the rules. Gigi Grant's 13 Wishes diary Whisp took the pieces and hid them all over within the lantern, ensuring that next time she would succeed.

Gigi's lantern was found centuries later by Howleen Wolf in Boonighted States of Scaremerica and Whisp got straight to work. The one thing she hadn't counted on was Howleen's sister and friends, who put the mirror back together and got Howleen out of her influence. However, Howleen, being a younger sister too, felt sympathy for Whisp and as her last wish freed Gigi from the lantern and made Whisp it's new genie, allowing her to make new friends the same way Gigi could before. Whisp gratefully took the spotlight she always wanted. 13 Wishes She fell to the bottom of the Monster High's Deep End, inside her lantern.

Inside the lantern, Whisp dedicated her life to learning the secrets of a djinn and learning the lessons she hadn't learnt from Gigi, looking back at her actions and sick schemes with despair and willing to turn a new page in her life. The lantern (somehow making itself out of the Deep End) was later found by the vampire Kieran Valentine, buried in the sand. Being summoned several times, Whisp and Valentine start to develop a close friendship, as both have in common their current redeeming status. Valentine's first two wishes weren't successfully granted, due to mis-phrasing. However his last wish was for them both friends forever, which allowed them to communicate via Djinn-ternet, and can keep contact even when Whisp returns to the lantern.

Whisp is "clever, mischievous and funny, and bursting with new ideas". She is, however, also the jealous type, which can come in the way of her good side. Sassy and cunning, if not cold sometimes, Whisp is someone who will not open to others and instead will allow an inner hate and despair to grow inside her head, like she did with Gigi.

After her transformation, Whisp is still equally smart, if not more intellectually defined, more willing to discover her powers and new restriction, with her newly-discovered passion for reading. However, though maintaining her sassy personality, she has decided to turn a new page and be good, entirely devoted to her job as a genie and she has allowed her evil mastermind days be gone.

Whisp is a majorly powerful being, being created from a genie's shadow therefore acquiring such abilities, as well as acquiring new ones over her experiences and relationship with shadows.

As a Shadow Genie, Whisp has the ability of:

As a lantern Genie:

Djinni and Gigi regard each other as sisters, with Whisp being the youngest created later during an full eclipse. However, she does not have any family, being a shadow-turned individual. She herself expresses to be reluctant over this topic, since in her bio she says she wished she could explain her family and creation. This could be the fact, aside from Gigi, Whisp doesn't have much of a family due to her being created as a shadow or she doesn't wish to speak about a possible relationship with Gigi's father.

Whisp has, or used to have, a close friendship with Gigi Grant, broken due to the unhealthy jealousy that consumed her for not having the same liberties as Gigi and being left lonely in her lantern. However, after Gigi sacrificed her powers to stay at Monster High, they've been working on their relationship, as they remain in contact through the Djinn-ternet.

Kieran Valentine and Whisp also became close friends once he becomes her first finder and both share their redeeming status and repulse for whom they used to be and how they used to behave (using their powers for evil and selfish deeds). Through her, Valentine learned what real love is like, since breaking hearts did not sustain his powers. They remain in contact through the Djinn-ternet as well, after Valentine's final wish was to have both remain friends forever.

Djinni doesn't have any romatic interests nor has shown any signs of crushing on any monster yet. 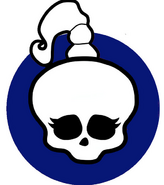 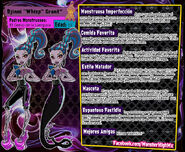 Retrieved from "https://monsterhigh.fandom.com/wiki/Djinni_%22Whisp%22_Grant?oldid=349535"
Community content is available under CC-BY-SA unless otherwise noted.