Dewey, Squirt and Tadpole Blue are triplets, and the younger brothers of Lagoona Blue. They appear in the Monster High Diaries book Lagoona Blue and the Big Sea Scarecation, and the TV Special Great Scarrier Reef

As water monsters they have scaled skin, one as pale blue scales, one green, the other a more aqua color. They have fish fins at the sides of their lower arms. They also have redish-brown eyes, and three toed feet.

They are the younger brothers of Lagoona Blue and Kelpie Blue, and the sons of Wade Blue. Ebbie is their younger sister.

When the triplets meet Gil in Great Scarrier Reef, they immediately take to him, and Gil has a fun time looking after them. 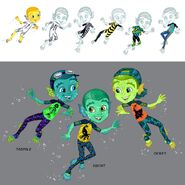 Add a photo to this gallery
Retrieved from "https://monsterhigh.fandom.com/wiki/Dewey,_Squirt,_and_Tadpole_Blue?oldid=346545"
Community content is available under CC-BY-SA unless otherwise noted.