Perseus is my two-tailed rat named for an ancient Greek warrior mom knew. She doesn't think it's funny.

Deuce Gorgon is a 2010-introduced and all-around character. He is a gorgon, specifically the son of Medusa Gorgon, and a student at Monster High. Deuce and his mother have a difficult relation, which he tries to make the best of and keeps out of his school life. His relation with his aunt Stheno and her daughter Viperine is a lot better, but they do not live in New Salem. Deuce is considered the hottest boy at Monster High as well as one of the most reliable and relaxed people to hang out with. Because of his personality, many are confused he is dating Cleo de Nile, a demanding and impulsive princess. However, it is these traits and their shared underlying troubles that makes them one of the finest couples at school. Other than being captain of several sport teams, most notably casketball, Deuce enjoys spending his available time on cooking. He is skilled at kitchen work, but not comfortable letting anyone know about it.

In the English version of the cartoon series, Deuce's voice was provided by Yuri Lowenthal.

Cam Clarke filled in for part of volume 3 until Evan Smith was cast to be the new voice for Deuce.

Among his peers, Deuce Gorgon is widely regarded as friendly and outgoing. He is consistently very welcoming of newcomers, being friendly toward Frankie during her first days at school, and inviting Jackson Jekyll to sit with him and Heath at lunch on his first day at school, despite the boy's outcast status among the other monsters. These traits, combined with his confidence and easy-going nature, make Deuce one of the most popular monsters around Monster High. Additionally, Deuce loves sports and is one of the captains of the casketball team. He also loves cooking, but he tries to keep it a secret.[1] He is very loyal to his girlfriend Cleo de Nile and tolerates a lot of her bad behavior with patience and grace, showing himself to care deeply about her and doing all he can to make her happy. Because of his mother's affinity for ancient art, Deuce himself also has an affinity for sculpting. Deuce Immortalizes Cleo in Pumpkin Carving Assignment

Deuce is tall, handsome and muscular, with green eyes that can turn people to stone (at least for a few hours) which is why he wears sunglasses. His scalp hair is actually scaly and green, and on top of his head are, depending on medium, six to nine snakes, forming a Mohawk (or a "snake-hawk", as Deuce calls it). He also has green scales on his bicep, though it's unclear if it is part of his natural skin or an added tattoo.

Deuce lives with his mother, Medusa, in New Salem, although it appears they have a home on Petros Island in Greece too, which is where most of Deuce's family lives. According to his Figurine Booklet, nobody knows who his father is, and it's not something Medusa likes to talk about. Furthermore, Deuce's relation with his mother is suggested to not be that good, most notably through Deuce's remark in "Ghouls Rule" that "family is complicated".

In the Monster High book series, Medusa's name is shortened to Maddy, so as not to attract unwanted attention.

Every summer vacation, Deuce and his mother travel to Greece to visit his aunts, Stheno and Euryale, the former of which Deuce often has a cook-off against, which may be where his love of cooking came from.[2] Viperine Gorgon is Stheno's daughter, thus making Deuce and Viperine cousins.

Even though Deuce seems to be friends with Heath Burns, he didn't hesitate in turning him into a stone in "New Ghoul @ School". When they're on the team, he also has Manny Taur as his friend. Typically in the doll diary of the doll logs profile bio in the back of the diary copies of dolls and at the back of the doll boxes, his BFFs or BFF's, also known as best friends forever are his girlfriend Cleo de Nile and Jackson Jekyll.

Deuce's pet is a two-tailed rat named Perseus, much to his mother's distaste.

In "Hiss-teria", we learn that when Deuce was young, he had a pet dragon named Smokey. Deuce was not in control of his powers, and accidentally turned Smokey to stone. Smokey is supposed to change back on the anniversary of the incident, although Deuce isn't sure which one.

Deuce is a popular boy, whose cool demeanor, sense of humor, good looks, and social skills easily earn him the attention of the female portion of the student body. Deuce is somewhat oblivious to this though, and himself humble in his romantic endeavors. He fell for Cleo de Nile when she was dating Clawd Wolf, and wouldn't ask her out while she was still attached to another. Word of his interest reached Cleo, whose relationship with Clawd was based on peer pressure, respect, and friendship, but not love. Cleo returned Deuce's interest, which was an additional motivation to Cleo and Clawd's imminent break-up.

Deuce and Cleo started dating only a day after the break-up Clawd Wolf's 'School's Out' diary and have been a steady couple ever since. This is mostly thanks to Deuce, who is patient towards Cleo's diva-like attitude and paranoia that Deuce would dump her for another. When asked by Operetta what he sees in her, he answered "she just brings out the best in me, you know. Makes me want to be a better Deuce." It states in C.A. Cupid's LS diary that Cleo and Deuce started dating on November 1st.

In "New Ghoul @ School", Deuce became Frankie Stein's first crush because he was nice to her and helped her when Heath Burns wouldn't stop his persistent and awkward flirting on his own. However, Frankie stopped viewing Deuce as a potential boyfriend the moment she found out that he was already dating Cleo, and even helped them get back together after she had accidentally made Cleo believe Deuce was cheating on her.

In "Hiss-teria", Deuce's suspicious behavior and Draculaura's misinterpretation of the things she saw led Cleo to erroneously believe he was cheating on her with Operetta. After a rather violent confrontation between the two, Operetta decided to steal Deuce from Cleo anyway to get back at her. However, Operetta discovered that Cleo's assessment on her and Deuce's compatibility was correct and she genuinely started to like him. When she made her move though, Deuce politely told her he already had a girlfriend and loved her very much. Touched by this, and aware of Cleo's paranoia, Operetta let go of her pursuit and offered to compose a song on Deuce's behalf in which he could express his feelings for Cleo.

In her 'Between Classes' diary, Rochelle Goyle wrote about her meeting Deuce when the two bumped into each other in the hallways of Monster High. Deuce was surprised to learn he couldn't turn gargoyles into stone and Rochelle fell in love with his beautiful green eyes. Though she knew he had a girlfriend and that she didn't stand a chance, she made sure to get to meet him in the days afterwards. One time even, she had Roux steal Deuce's casketball to lure him to her.

Deuce himself has expressed mild interest in Abbey Bominable, lowering his sunglasses to get a better look at her when she started her first day at Monster High in "Back-to-Ghoul". In "Terrifying Telephone", Frankie and Draculaura, and to a lesser extent Clawdeen and Cleo, thought Deuce was cheating on Cleo with Abbey. It turned out that Deuce was meeting with Abbey because she helped him create an ice rink in his backyard for a romantic surprise date with Cleo.

In the Monster High books, Melody Carver kissed Deuce to get back at Cleo for kissing Jackson Jekyll out of spite towards Melody. It is unknown if he really felt anything about this.

Deuce is also often consulted by his male friends when they have trouble with getting or keeping their relationships on track. Gil Webber talked with Deuce about his lies to Lagoona in "HooDoo You Like?", and Clawd Wolf has asked Deuce for help with Draculaura in "Hyde and Shriek" and his Sweet 1600 diary.

In the Generation 2 reboot in "Welcome to Monster High" when Cleo and Deuce first meet he accidentally petrified her. In a photo after Cleo is returned normal Deuce smiles guiltily at her while she is unimpressed. In the reboot Deuce is skinnier and shy and still attracted to Cleo. He helps her set up the first party and gives her credit though she doesn't thank him at all. Despite the coldness he asks her to join him in the photobooth in which she coldly complies. Cleo is indifferent until Deuce makes her laugh. During the battle with Moanica and the zomboys Deuce saves Cleo from a creeping Zomboy. She returns the favor when he is in danger and the two smile warmly at one another. At the end during Ari's big song, Deuce dances next to Cleo and they exchange interested looks.

He has the same power as any gorgon:

In Monster High, Melody kisses Deuce to get back at Cleo for kissing Jackson. This causes a rift in Cleo and Deuce's relationship, but they work through it. When Cleo decides to not go to the Monster Mash, Deuce and Melody go as just friends. When Melody removes Deuce's sunglasses, he gets angry and leaves the dance.

As well as wearing his sunglasses at all times, in the Monster High books Deuce must also always wear a hat in order to hide his snakes.

In The Ghoul Next Door, he redeems himself to Cleo by giving her a snake (which was his mother's first grey hair), that she names Hissette. Near the end of the second book, he turns Brett to stone thinking he also sabotaged the documentary in which he mentioned that his gaze is temporary.

In the third book, after The Ghoul Next Door was sabotaged, he and his mother go back to Greece.

In the fourth book he returns to Salem where he and Cleo were nominated for the contest. Near the end of the book he transforms the backdrop of the gym for the graduation ceremony into stone.

The original art of Deuce Gorgon with Perseus by Glen Hanson.

Deuce as he appears in the Fright Song Music Video

Deuce with Cleo in the Higher Deaducation Advert

Deuce breaks the camera by removing his sunglasses 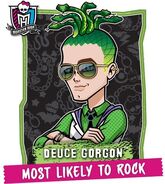 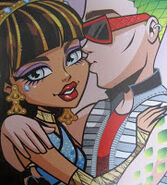 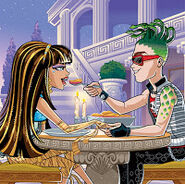 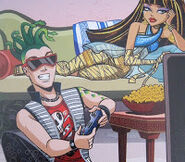 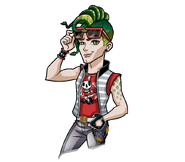 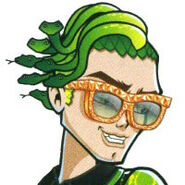 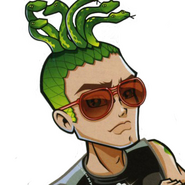 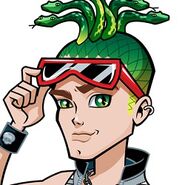 Retrieved from "https://monsterhigh.fandom.com/wiki/Deuce_Gorgon?oldid=353627"
Community content is available under CC-BY-SA unless otherwise noted.