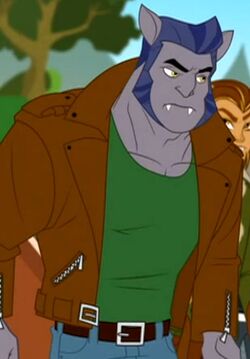 Dee O'Gee debuted in the cartoon series in the Volume 2 TV special "Fright On!", which premiered on October 31, 2011. His voice actor is unknown.

In "Fright On!", Eventually, conflict is avoided by the appearance of Romulus, pack leader of the Crescent Moon High group, who tells his friends that they should not cause trouble on their first day. Though out most of the movie Dee O'Gee is with Romulus.

Crescent Moon High werewolves are marking parts of Monster High as their territory, including Dee O'Gee.

Along with Howleen, Dee O'Gee is a leader of a new cultural group, Were Pride.

Though Clawd broke up with Draculaura, the rumor that the werewolves have harmed her infuriates him and he demands Romulus to tell him what happened. Romulus denies involvement and points out that, if anything, Clawd should be worried about what has happened to his little sister. Clawdeen joins him then, revealing that she went to talk with the vampires and that they swear they haven't harmed Howleen. With Frankie also missing and Bloodgood's statue gone, Clawdeen figures that Frankie was right and that Van Hellscream is behind all the disappearances. She and Clawd decide to first find their friends and family using their superior olfactory abilities. This leads them to the catacombs, where they get Operetta to be their guide. The captives have freed themselves meanwhile and are making their way outside when they are attacked by scargoyles. With combined strength, they manage to hold the creatures off just until Clawd, Clawdeen, and Operetta find them.

Right before the fight can commence in the gym, Howleen and Draculaura burst in to tell both sides to stop. The werewolves and vampires are surprised to see their kin well and free, so Bloodgood and Frankie explain Van Hellscream's plan and why Monster High is such a threat to him. Realizing they've been manipulated for awful goals, the vampires and werewolves agree to peace and the entire student body gets together to quickly put up a party to leave a good impression with the Skullastic Superintendents. The plan succeeds, and after they've left, the students and Bloodgood confront and corner Van Hellscream and Crabgrass. Van Hellscream threatens to use one of his many potions and charms against the monsters, but Deuce beats him to it, petrifying both him and Crabgrass. Following this little interruption, the party continues. As Dee O'Gee is seen dancing with Toralei Stripe.

In "Unearthed Day", He appears as a backgrounder not doing anything note worthy.

In "Aba-Kiss Me Deadly", He makes a cameo appearance.

In "Bean Scare, Done That", He makes a cameo appearance.

In "Hiss-toria", He is mostly seen in clips of the events that happened in "Fright On!", and makes a cameo at monster high.

In "Boo Year's Eve", He makes a cameo appearance.

In "Fierce Crush", He is seen giving a werewolf girl a flea collar, trying to be romantic.

In "Flowers for Slow Moe", He makes a cameo appearance.

In "Party Undead", He makes a cameo appearance.

In "Super Fan", He makes a cameo in the schools gym.

Dee O'Gee being romantic
Add a photo to this gallery 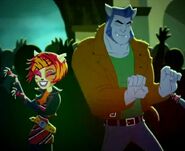 Add a photo to this gallery
Retrieved from "https://monsterhigh.fandom.com/wiki/Dee_O%27Gee/cartoon?oldid=347658"
Community content is available under CC-BY-SA unless otherwise noted.