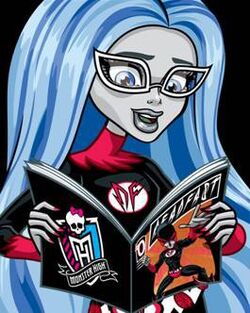 Dead Fast is a fictional franchise revolving around the life and adventures of the superhero Dead Fast. The franchise's main component is a series of comic books, created by Killee Rotley and Ooo-ick Hardeeee, but the Dead Fast line also includes video games, action figures, clothing, and tote bags.

Ghoulia Yelps is a huge Dead Fast enthusiast and owns many of the franchise's products.

Dead Fast used to be a normal zombie named J.B., who worked for Dr. Igorable's company. One night, he found out that his boss intended to rid the world of "nasty zombies", and in the process of trying to get help he was bitten by a radioactive hummingbird, and thrown into an industrial cotton candy. He emerged from it as Dead Fast and became the last defense against Igorable's plans himself.

The Shadow Poacher may be another enemy of Dead Fast.

Ghoulia began reading the Dead Fast series on July 25 of her first high school summer vacation. Her attention was drawn by Dead Fast's superpower: superspeed, a trait she enjoyed imagining she possessed. Within a few months, she was hooked on the series. In presumably October, she listened to a podcast interview with the creators of Dead Fast: Killee Rotley and Ooo-ick Hardeeee, enjoying it greatly. She also put her own drawing skills to use to create her own Dead Fast artwork and comics, as well as her own Dead Fast OC: Ms. Dead Fast.

Depending on the continuity, she went to Nekrocon next July dressed up as her OC and got herself a Dead Fast action figure and met Killee Rotley, and Ooo-ick Hardeeee or she stayed home and through her friend Cleo acquired Dead Fast #0.

As president of the Comic Book Club, Ghoulia has an outlet to talk about and promote her favorite superhero. She also owns a handheld Dead Fast video game.

Retrieved from "https://monsterhigh.fandom.com/wiki/Dead_Fast_(franchise)?oldid=345278"
Community content is available under CC-BY-SA unless otherwise noted.