I don't have a pet meself, but all the critters of the sea I meet know they are welcome to set sail aboard me vessel.

Dayna Treasura Jones is a 2016-introduced and doll-only character. She is the daughter of Davy Jones.

Dayna Treasura Jones has golden skin, dark golden tan freckles under her sapphire blue eyes with white stars in them, and long, soft, creamy, curly hair. Her eyebrows are brown, despite her hair color. Her lips are deep red, like rubies. She wears black gloves, pale blue earrings with green parrots on them, a gold belt, and a blue dress with a map-like design.

Not much is known about her personality, but she seems to be a fan of treasure hunting. And she acts like a stereotypical pirate.

Dayna Treasura's father is Davy Jones from Nautical Folklore. In this folklore, Davy Jones is said to be the Sailor's Devil who rules "Davy Jones' Locker," an underworld located on the seafloor populated by the spirits of those who drowned at sea. The exact nature of Davy Jones' species of monster varies from story to story, sometimes being said to be the ghost of a man named Jonah who was damned by the Abrahamic God to be doomed at sea for eternity; in some, he is said to be the ghost of an evil 16th-century pirate named Captain David Jones, while in other stories he is said to be a water-spirit called a Neck similar to a nymph or faery and who lures sailors to a watery tomb. In modern nautical traditions, Davy Jones is considered the first assistant of the Roman sea god Neptune and was given the job of ruling those who drowned at sea.

Dayna Treasura's bio lists Vandala Doubloons as one of her best friends, which is assumed to be, because they're both pirates who enjoy treasure hunting on their free time.

Additionally, she also considers River Styxx a friend, possibly due to the fact that they are both are sailors who spend a lot of time around their respective forms of transportation. 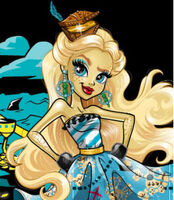