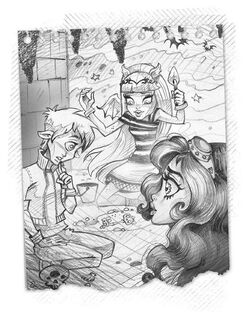 Cy Clops is a 2012-introduced and prose-only character. He is a cyclops and a student at Monster High. He is shy, but polite, knowledgeable, and patient.

Cy is a shy, quiet, patient, and caring boy. He is also very knowledgeable.

Cy has scruffy hair, a sculpted face, sheep-like ears and like all cyclopes, he has his single green eye in the middle of his face. He has an average built body and in terms of clothing, it's all casual.

Each of the Ghoulfriends' books is color-coded to match a protagonist by hair color. The exception is the fifth book, which doesn't match anyone. Arguably, it could be tied to Cy.

Cy semi-regularly talks about his mother, whose meals are worse than the creepateria's and who taught him that people who whisper have something to hide.

There are two characters in the rest of the franchise who share his species and last name: Iris Clops and Simon Clops. Either one could be family of him, but the fact they aren't confirmed to share a continuity speaks against this.

Cy is generally well-liked around the dormitory. He is close friends with his roommate Henry Hunchback and after joining forces with Robecca, Rochelle, and Venus to stop Sylphia Flapper, he is essentially part of their team.

Cy developed a crush on Robecca in Ghoulfriends Forever, going from merely admiring her beauty to caring deeply about her as a person. Because she's prone to forget things, he follows her around and makes sure anything she's lost is returned to her and anything she doesn't know she is informed of.

Cy is one of the first students to be given a room in the newly-built dormitory, sharing his with Henry Hunchback. His eye is caught by a fellow dorm dweller, Robecca Steam, whom he considers the epitome of beauty. His initial interaction with her is limited to staring, but this changes when he is revealed to be very knowledgeable during Home Ick and Robecca takes note of him. From that point on, Cy, too shy to communicate with her in a direct manner, starts following her around to pick up and return items she forgot and inform her of the time and other data when she needs it. This causes him to get behind on homework, for which he ends up getting detention in the dungeon. Once through with his punishment, he leaves quickly, but forgets a book in the process. When he goes to get it, a meeting of MALL, the popular after-school club of Sylphia Flapper is in session. The experience unnerves Cy, because all the students present whisper rather than talk. Cy leaves unnoticed and tells Henry of what he saw. Though Cy warns him, Henry decides to take a look for himself when the opportunity arises. The one other person Cy tells of what he witnessed is Robecca, whom he approaches after SKRM training to finally admit his feelings as well. Unlike Henry, Robecca heeds his warning, with the result being that Henry comes under Flapper's spell and Robecca remains safe. When Cy finds out Henry's been caught, he goes to Robecca's dorm room and finds that she and her friends have gotten Nami, the school's Deputy of Disaster, involved and are waiting for a signal from her that she's succeeded. The now-quartet decides to relocate to the belfry to be safer than they are in their room. For the longest time, they just wait, until they hear an announcement from downstairs to gather in the vampitheater. Hopeful but careful, they go, only to find that both Nami and Headless Headmistress Bloodgood are now under Flapper's control too. Flapper finally reveals her plan to create an army out of the monster community to wage war on the human population and promises that no one will stand in her way. The quartet quickly rushes out and hide inside the SKRM maze to form a new plan, of which the first step is to break into the main office and get Flapper's personnel file to get the contact info of her previous school. Cy finds it just before they are discovered and have to flee and find that Flapper previously was a teacher at Accademia de Monstro. Cy sneaks out to the nearest classroom with a telephone he can use to reach Bitealy with and comes in contact with Signore Vitriola, the headmaster of Accademia de Monstro. With his reluctant aid, the quartet learns that they need to make Flapper swallow one teaspoon of ground Fernish Bush at midnight while a recently zombified snake is wrapped around her neck. The ingredients they get from around the school and they will have access to Flapper at midnight during the Dance of the Delightfully Dead soon. In order to get past security, they dress up as werewolves, and in order to achieve their goal, they split up around the stage Flapper stands on. Cy is the fourth one to act, throwing teaspoon of ground Fernish Bush in Flapper's mouth after Robecca blasts steam in her face to make her scream. Through their teamwork they break the spell. As the only ones who remember the past days, given that Flapper claims to be a victim of the whisper too, they bring the students and teachers up to date. To their displeasure, most of the school believes Flapper and she is kept as teacher, but as normal life returns, the four are happy to just not worry. That is, until they receive a package from Vitriola, warning them it isn't over yet. Ghoulfriends Forever Ghoulfriends Just Want to Have Fun