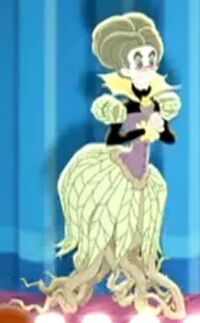 Crabgrass is a 2011-introduced and fiction-only character. She is a plant monster and a former staff member at Monster High, where she worked as Headless Headmistress Bloodgood's assistant alongside Nightmare. Secretly, she always was working for the monsterhunter Van Hellscream and assisting him in his mission to keep monsters at war with one another, so that they won't have the time or energy to harm humans. Crabgrass's time at Monster High was to keep track of the all-monster high school and report on any dangerous progress. After being found out, the school had her fired. Crabgrass seems to be able to produce a powder that allows her to take on the appearance of anyone of her choosing, but it's also possible Van Hellscream provides her with the powder.

In the English version of the cartoon series, she is voiced by Wendee Lee.

Crabgrass is a cranky elderly lady with little patience for anyone but her boss. She shows a small level of disdain for the monsters around her, which is reflected in situations such as how she never bothered to learn Frankie's name, instead calling her "Francie". Like Van Hellscream, Crabgrass has no faith in monsters' capability of living with humans in peace.

For a time, Crabgrass worked at Monster High as Headless Headmistress Bloodgood's assistant, though only to keep an eye on the school for Van Hellscream. During her time there, she turned a supply cabinet into a special grow room with lights that mimicked the sun so that being indoors all day wouldn't affect her health. After her betrayal, the room went unused until Venus McFlytrap enrolled. Bloodgood gave her the key so she could use it any time she was feeling droopy.[1]

Crabgrass is an older women as shown by her wrinkles, and grey hair. She wears thin sharp red glasses, her top has sleevs that look like vines, and her skirt looks like long plant leaves. As a plant monster, instead of having legs she has roots and vines as legs. 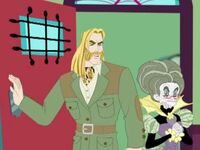 Ms. Crabgrass is the faithful assistant of Van Hellscream, a human expert on monsters who strives to keep the monsters enemies of one another to distract them from attacking humans. Despite the fact that Crabgrass is a monster herself, she shares his ideas and doesn't think twice about following his orders. That being said, neither she nor Van Hellscream would give their life for the other.

Crabgrass got employed at Monster High at some point in time, presumably to keep an eye on the proceedings at the only all-monster school in existence. When she heard of the plan for Monster High to share its ideals of monster-human unity with Belfry Prep and Crescent Moon High, she became extra alert. Once it had been established that Monster High's ideals could bring vampires and werewolves together, she contacted Van Hellscream so he could take care of matters personally.

Van Hellscream soon arrived, and with Crabgrass's assistance, he turned Headless Headmistress Bloodgood into a statue, upon which Crabgrass assumed the headmistress's identity. The first thing she did was disband Frankie Stein's welcoming comittee, after which she gave Van Hellscream the freedom to make his home in Bloodgood's office and manipulate the student body back into prejudicial thoughts. When Frankie noticed Van Hellscream was ruining everything that had been accomplished, she went to Bloodgood's office, where she questioned Van Hellscream's methods to Crabgrass. Crabgrass parried that a youth like her couldn't understand a monster expert like Van Hellscream's methods and then chased her and Abbey Bominable out. However, because she had consistently referred to Frankie as "Francie" and because it was clear Nightmare was terrified of her, Frankie realized she had not been speaking to the real Bloodgood.

Later she and Lagoona Blue saw Bloodgood drink with her finger, the rest of the ghoulfriends began to believe Frankie's assessment. Upon the following question where the real Bloodgood was, Van Hellscream uncovered a new statue in front of the school, the real Bloodgood. Frankie and Abbey tried to free her from the spell, but in the process got caught with her, Draculaura and Howleen Wolf by Van Hellscream. The group managed to escape their predicament only just in time to prevent a werewolf-vampire fight over the missing Draculaura and Howleen, explaining to the other students that they had been manipulated. To thwart Van Hellscream's plans, the students quickly arranged for a grand party that evening, so that when the Skullastic Superintendents would arrive, they'd see that different kinds of monsters could get along. Crabgrass and Van Hellscream were left stupefied at the sudden recovery of community spirit among the student body, leaving them open for an attack by those same students. Though Van Hellscream possessed the means to fight them all off, he and Crabgrass were caught offguard by Deuce's petrification beam, leaving them statues just as they had done to Bloodgood. Fright On!

Retrieved from "https://monsterhigh.fandom.com/wiki/Crabgrass?oldid=348840"
Community content is available under CC-BY-SA unless otherwise noted.