I've been clawing through all my literary references trying to decide what I should get... maybe I'll choose an albatross or ohh... a raven.

My brothers and sisters.

Clawdia Wolf is a 2013-introduced and all-around character. She is a werewolf and a Monster High alumni. She comes from a family with many children—among which Clawd, Clawdeen, and Howleen—and is the youngest of the ones who've already moved out. She currently lives in Londoom, Fangland, where she studies Dramatic Writing to make it as a screenwriter in Hauntlywood. She is talented, already has connections, and is even employed to write for the Vampire Majesty series of movies, but she's still aiming for a proper degree.

Clawdia is an aspiring screamwriter studying in Londoom. Her family is very important to her, and she misses them while she is away at school. Unlike many of her Wolf siblings, she does not have any athletic ability and is actually quite clumsy. Living in Londoom, in Fangland for such a long time has infected Clawdia's taste buds in effect a great deal amount, as her favorite foods are now fangers and mash, which is like bangers and mash, and fish and crypts (fish and chips). Although not a British food or English food, she also loves roast beef. As an aspiring cryptwriter, she is reliable on her writing talents to be a good scriptwriter. Clawdia is a good screenwriter, and has an inspiration in William Spookspeare as Spookspeare was famous for his good and excitable plays and scripts, or crypts.

Clawdia has long mustard-yellow hair in curls which is blond hair. Her hair is usually tied in a long ponytail. She also wears black-framed, thick-framed glasses. She has dark brown skin which is actually fur, bright yellow eyes, and fangs. Her civilian outfit is a businesswoman jacket that is reddish-pink colored. She wears a golden skirt with black-colored ancient symbols on it. Red-pink socks cover her feet with golden high heeled shoes.

Clawd, Clawdeen, and Howleen are Clawdia's younger siblings. Most fiction also establishes that she has many more older and younger siblings. Her father is Clawrk and her mother is Harriet Wolf. Since the Monster High books release Clawd as Clawdeen's only older sibling and Howleen as Clawdeen's only sister, Clawdia does not exist in the book series. There is a younger unnamed brother brought up by Clawdeen in "Rumor Run Wild", so he must also be Clawdia's younger brother. She is one of the eldest older siblings, but probably has older siblings, and writes stories to her sister Howleen according to Tales from the Script. She keeps in touch with her family while she is in Londoom in Fangland.

In "Clawdeen Wolf and the Freaky Fabulous Fashion Show", The Wolf relatives move in the next day, and while Clawdeen doesn't get the chance to work much on her clothes, she does show her designs off of her Grandparents and cousin Clawdette, who are genuinely impressed. Clawdeen's happy that she's able to share her work with her family, she just wishes they could spare her more time to work on it.

A week later, Clawdeen asks if she can go visit her friends to get some work down with them, but is asked to help Clawdia, Clawd and Howleen babysit Clawdette and the younger cousins while the adults are out for the night. She goes to find some arts and crafts stuff for them to play with, only to find them playing with her outfits for the show, accidentally ruining them. 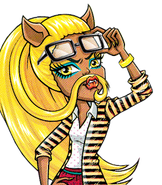 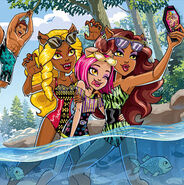 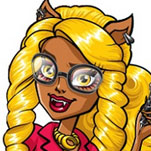 Add a photo to this gallery
Retrieved from "https://monsterhigh.fandom.com/wiki/Clawdia_Wolf?oldid=346651"
Community content is available under CC-BY-SA unless otherwise noted.