Clawd Wolf was trademarked on November 18, 2009 and his first doll came out in Mid June, 2011. As of January 01, 2015, his doll number totals 6 and makes up 1.18% of the entire Monster High doll collection. Other merchandise of him is not yet available.

Clawd wears a white shirt with orange crossbones on it. Over it, he is wearing a golden vest with a white ragged collar. He accessorizes with a black and teal checkered scarf, a teal ivy cap, a golden earring in his left ear, and a golden wrist watch. Clawd's pants are simple black jeans with teal stitching, which he combines with a teal belt with a golden buckle. For shoes, he wears golden boots with black soles. The doll comes with a Rockseena figurine, a diary and a teal doll stand. The doll is sold in a 2-pack including the 'School's Out' Draculaura doll.

Clawd wears a black t-shirt with teal tie underneath a tuxedo. The tuxedo is primarily made of teal and black fabric sporting an assortment of shapes, such as skullettes. Spread over the shapes are golden rectangles, matching the golden edges and lapel. On the left side of the lapel is a golden pin in the shape of an orb fastened. He wears black trousers with golden stitching, reaching down into grey ankle boots with black soles. His accessories are a golden belt, sunglasses and a golden earring in his left ear.
The doll comes with a black, white and pink dress for Draculaura, a pink necklace in a black gift box for Draculaura, a coffin-shaped invitation, a real-life sized black brush, a black doll stand, a code to unlock special content at the website, and a real-life sized teal key to unlock the Sweet 1600 app on iPhone or iPod Touch.

Clawd is ready for his music festival date with Draculaura with a black singlet with teal trim and teal crossbones pattern, dark grey denim shorts with teal pockets, golden shutter sunglasses, a teal watch and teal flip-flip sandals, with a crossbone adorning the straps and his V.I.M necklace. His hair is shaved at the sides and back, with him having a small teal streaked afro-puff at the front. The doll is only available in a 2-pack with Draculaura, which is a Kmart exclusive.

A Pack of Trouble

Clawd comes in a two pack with his sister Clawdeen. The two pack is sports themed. Clawd is the football player and Clawdeen is a fearleader. Clawd comes with blue shoulder pads, a blue helmet, and a gold football. 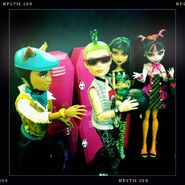 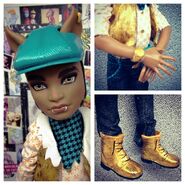 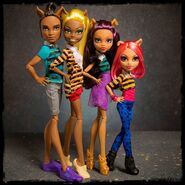 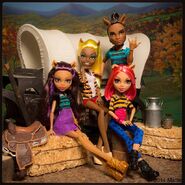 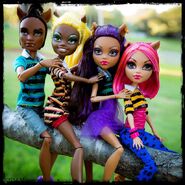 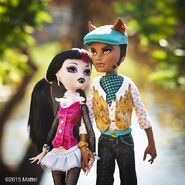 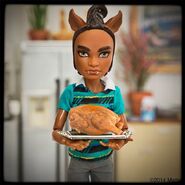 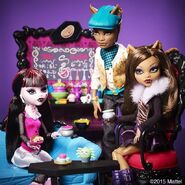