Clawd Wolf debuted in the cartoon series in the Volume 1 webisode "Fur Will Fly", which premiered on December 2, 2010. He is voiced by Yuri Lowenthal and Ogie Banks in the English version of the cartoon.

Heath Burns challenges Clawdeen to two laps around the track. Certain of himself, he brags to Clawd that Clawdeen will be easily beaten. Clawd, knowing the moon is full tonight, merely cryptically replies that Heath shouldn't have picked today to challenge her. Fur Will Fly

Clawd helps a troll with his books, unaware that this observation brings Frankie to suggest him as boyfriend material to Draculaura. Why We Fright Clawd is about to make the winning throw in a casketball game when suddenly Draculaura falls into his arms, knocking the ball out of his hands and costing Monster High the match. Undaunted by this, Clawd comes to Draculaura's aid when Heath mocks her. He gets Heath to drop his and Draculaura's date and invites her to the Spirit Rally with him instead. Fear-A-Mid Power

Clawd plays a game of casketball in the hallways with the rest of the team, until Clawdeen pulls him aside. She interrogates him about his reasons to take Draculaura to the Spirit Rally, but he assures they are going as friends. Beast Friends Clawd fulfills his Casketbal Captain duties at the Spirit Rally and later dances with Draculaura, which leads to her confessing her feelings to him. Varsity Boos Draculaura and Clawd avoid each other for a while after Draculaura's confession. Gloomsday

Clawd is among the onlookers rooting for the Fear Squad to get their one million hits on FrightTube. Fatal Error Draculaura has a dream of multiple Clawds joining her at Gloom Beach. Screech to the Beach A letter from Clawd to Draculaura alerts Clawdeen to the fact the two lied to her about not being romantically involved. Road to Monster Mashionals

Draculaura confronts Clawd about him not writing her at Gloom Beach. Clawd vows he did write her, but Draculaura does not believe him. Queen of the Scammed Clawdeen confesses to Draculaura that she hid Clawd's letters. Frightday the 13th Both Clawd and Draculaura are giving Clawdeen the silent treatment. HooDoo You Like?

Clawd and Draculaura are hanging out again following Clawdeen's confession. Clawdeen can't stand it and presents Draculaura with a steak so she'll faint and Clawd will acknowledge they won't work as a couple. Instead, Clawd is furious at Clawdeen. They reconcile only after Clawdeen has apologized to Draculaura and promised to stop driving the two apart. Fear Pressure Miss Infearmation Hyde and Shriek Back-to-Ghoul Hyde Your Heart Ghostly Gossip The Bermuda Love Triangle Rising From the Dead Monster Mashionals Part 1 Monster Mashionals Part 2

Clawd struggles to find just the right gift to give to Draculaura on her Sweet 1600th birthday, but his first couple of attempts end in failure, and him receiving a good whack on the head from his little sister, Clawdeen, and a rolled-up magazine. He even tries to ask C.A. Cupid for help via her radio show. He decides to go with a box full of memorabilia from several things he did with Draculaura, only to soon learn of him now having a rival in an old flame of Draculaura's from Transylvania, Valentine. When he learns of Draculaura now being under Valentine's spell, he seeks the aid of Cupid with freeing her, but ends up falling in love with Cupid upon being struck by one of her arrows due to Toralei's interference. After he's freed from Cupid's spell, he tries to get the box of memorabilia to Draculaura, but is pinned to a column by Valentine. However, the box reaches Draculaura, and the memories she has of items breaks Valentine's spell on her. Afterwards, once Valentine and Toralei are tossed out of Draculaura's party, Clawd presents Draculaura with a driver's instruction guide to help her study for taking her driver's test again. He joins Draculaura as she leaves Monster High in her new car, getting one last dose of payback on Valentine and Toralei by splashing them with muddy water as they drive past. Why Do Ghouls Fall in Love?

Clawd does his best to keep Draculaura in good spirits as she's picked on over her disgust of Veronica Von Vamp and her movies by Toralei, Gory, and other students, however, when Draculaura is asked to return to Transylvania for her coronation as the Vampire Queen by Vampire Prime Minister Lord Stoker, Clawd has to stay behind at Monster High, leaving him deeply upset over being separated from his girl for some time. Despite his grief over not seeing Draculaura for a while, he joins with Deuce and Gil to remain neutral in Toralei and his little sister Howleen's argument over which of two handsome actors is better looking. He even remains neutral about it once it is resolved in Cute Court that the two actors are the same guy portraying both roles. Later, he is reunited with Draculaura at the debut of Veronica's latest movie, and her coronation as the true Vampire Queen, Elissabat, being summoned to Draculaura's side by a dog whistle. After that, he joins Draculaura as her date for the movie, joined by their friends and the rest of Monster High. Frights, Camera, Action!

As Clawd cheers on Lagoona and Sirena during a swim meet, he finds himself soon being alienated by Deuce, Gil, and the other guys thanks to a piece of gossip about him and his sisters having were-fleas told to Spectra by Toralei. He ends up taking it seriously so much that he is forced to keep his distance from Draculaura and have other guys like Johnny Spirits deliver gifts to her on his behalf. In the end, Clawdeen resolves the problem and reveals the gossip being fake, and Clawd is able to be with Draculaura again during the celebrations for Monster and Haunted High's new unity and friendship. Haunted 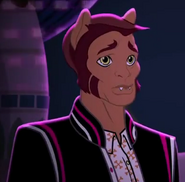 Who can say no to that? 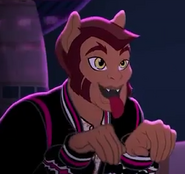 "How do you gonna do your homework with that outdated stuff? Here, use my laptop."

"Two..." Counting down the Boo Year with your ghoul! Make sure to kiss her at midnight!

"Last minute sales. Those savings were meant to die for." Draculaura said to Clawd. 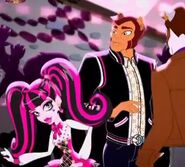 Clawd as he appears in, "Why Do Ghouls Fall in Love?"

"You should've known not to mess with the BMOC." Clawd along with Ghoulia.

Can you say cheesy?

Draculaura & Clawd running for their love to get a hug for a date.

It seems Clawd's found himself a new ghoul, the Mistress of Love herself, C.A. Cupid!

And he's back with Lala!

I won it for you!

"I've seen all I need to see!" Clawd cracking his knuckles along with Clawdeen and Howleen.

Clawd's sad face after he fell from an injury and loses the competiton to Granite City.

"Captain Clawd Wolf!", the announcer said with his hand raised for victory.

"A ball!" Clawdeen's long sleeved arm is showing his tennis ball at Clawd to fetch. 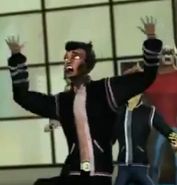 When the cops are coming for you, there's no other option than to... RUN!!!! 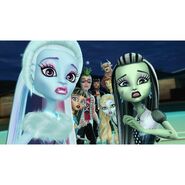 Clawd surprised after Chad touched his arm at a normie party at his house in New Salem. 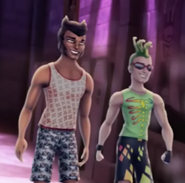 Clawd hugging Draculaura, along with Heath showing his muscles with Ghoulia, Abbey, Lagoona and Toralei.

Strutting his stuff on the Catwalk with Draculaura in "Scaris: City of Frights"!

Add a photo to this gallery
Retrieved from "https://monsterhigh.fandom.com/wiki/Clawd_Wolf/cartoon?oldid=315681"
Community content is available under CC-BY-SA unless otherwise noted.