The Classroom line is somewhat of a nameless line insofar that the name is not printed on any individual boxes. The shipment boxes are labeled Classroom Doll Assortment, though, and Mattel's own channels refer to the dolls as Classroom the same way on-box names are used.

The Classroom accessories are mostly exclusive to the Classroom line, but a few are shared with other lines.

Each 2011 doll comes with a survival guide, a booklet with notes on the relevant class and a short biography on the class's teacher. The 2013 dolls have class notebooks, in which the process of their projects is described.

None of the Classroom outfits were ever seen in the webisodes, but some accessories are, while in other cases small references were made. The frog and egg with Lagoona's doll played a role in the webisodes "Freedom Fight" and "Hatch Me If You Can". Frankie's Home Ick class was mentioned in "Fear Squad". Ghoulia's doll would be the only one without a feature webisode, but curiously, a webisode playing on several points of her survival guide was released in Volume 3: "Dodgeskull". 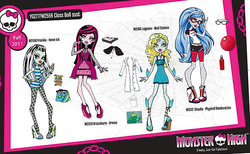