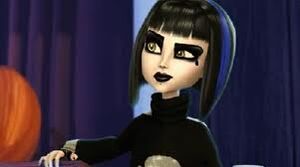 Clair is a 2012-introduced and cartoon-only character. She is a human and a student at New Salem High. On average, Clair prefers to limit her company to herself and Chad, but she refuses to stand idly by when she sees someone being maltreated or judged unfairly. She also keeps an eye open for newcomers who appear to be interesting and isn't hesitant to approach them. Clair is fairly clever, but she also thinks herself better than most others because of it.

In English, she is voiced by Erin Fitzgerald.

Clair is a sarcastic girl with a minor sense of superiority over her peers. However, she appears to be so to hide her own insecurities, as "the same insecurities" was her line when the monsters and humans noted their similarities.

Clair has short black hair styled into a bob with bangs, she has a blue stripe in it on her left side. She wears heavy black make-up on her eyes and wears black lipstick, she has a black tear drop-like dot under her left eye, she has a labret piercing and her eyes are yellow. She wears a long turtle-neck sweater with white stripes going down the arms and a skull and crossbones on the front. She wears tights/leggings that are white with black stripes. Her shoes are brown short ankle heels.

Clair's best friend is Chad, in many ways her perfect opposite. Unlike Clair, who prefers to be solitary and quiet, Chad is a very social person. Their point of connection is that they are both protective of and kind towards others. This came into play when the monsters show up at Chad's Halloween party, whom they were welcoming towards even when they realized they weren't humans in costumes.

In "Ghouls Rule", she and Jackson Jekyll quickly become friends after their first encounter with each other at Clair's school. Throughout the adventure, Clair stays on his side and even kisses him at the Halloween party hosted by the monsters. 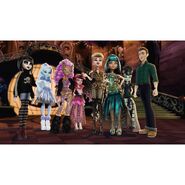 Add a photo to this gallery
Retrieved from "https://monsterhigh.fandom.com/wiki/Clair?oldid=344866"
Community content is available under CC-BY-SA unless otherwise noted.