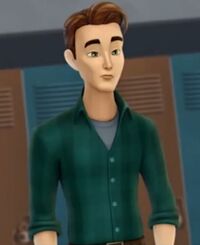 Chad is a 2012-introduced and cartoon-only character. He is a human and a student at New Salem High. Chad is the kind of person who can make anyone feel at ease and who prefers to judge based on actions before looking at the rest. He is as energetically welcoming to friends as he is to strangers and not one to let injustices pass just because it's less of a hassle to him. Chad is unanimously liked at school, even by social sideliners like Clair.

In English, he is voiced by Steve Staley.

Chad is a friendly, outgoing teenager. He is accepting of everyone, including monsters, and is willing to invite strangers into his house for his Halloween party. He also defends what he believes is justice, willing to help Frankie Stein rescue Holt Hyde from an angry riot. Good-natured, Chad just seems to want to have a great time, and to make sure everyone around him is having as much fun as he is. He is a bit oblivious of others, as seen with his unorthodox dancing and his humourless jokes.

Chad's best friend is Clair, who is the complete opposite of Chad. While Chad is social and amiable, Clair is solitary and quiet. Chad also seems to have a degree of friendship with Lilith Van Hellscream and her goons, whom he invited to his Halloween party. Chad also quickly befriended Jackson Jekyll after he was mistaken for a student at New Salem High.

Chad is first seen inviting Frankie Stein, Lagoona Blue, Abbey Bominable, and several others to his party after the monsters were debating over who vandalized New Salem High. Chad defended the monsters against Lilith Van Hellscream, and later helped Frankie save Holt Hyde from the Trick-or-Treatment punishment he was going to receive by inciting a mob to attack Monster High and taken Holt. Ghouls Rule

Add a photo to this gallery
Retrieved from "https://monsterhigh.fandom.com/wiki/Chad?oldid=349570"
Community content is available under CC-BY-SA unless otherwise noted.