Catty Noir debuted in the cartoon series in the Volume 3 TV special "13 Wishes", which premiered on October 8, 2013. She is voiced by Missi Hale in the English version of the cartoon and Karen Strassman in Boo York, Boo York.

Catty makes her grand entrance at Monster High with a concert during the Eclipse Party. 13 Wishes

Catty is a self-made artist, whose only vice is her sensitivity to superstition. Her career seems to be over when she cancels a concert because of a bad feeling, but as it turns out, had the concert taken place, all present would have died in a series of natural disasters. Monsters of Music

She leaves the world of glitter and glamour for a while in order to enjoy a simpler life outside of the spotlight. Monster High is her high school of choice, where she hopes to be accepted as a peer by the other students. But fate isn't with her, as she finds out the moment she steps out of the car and is met by a crowd of enthusiastic fans and large banners bearing her image. Vainly hoping this event does not predict what her time at Monster High will be like, Catty gets on with her first day.

When looking for her locker, Catty finds herself surrounded by Frankie Stein and her friends. They show her her locker, which has been obnoxiously decorated with lights and pictures of her. The group explains they made a diva locker out of her locker to make her feel at home. Catty is disappointed, but lets it slide. Later on, she gets an A in Mr. Rotter's class for a test she never even got to make, because the teacher thinks of her as above it. Growing more distressed by the hour, Catty arrives at the creepateria during lunch only to see it covered in posters of her. She is invited to a long line of tables placed together, which she soon learns has been done specifically because everyone wanted to share a table with her. Full-out disturbed at this point, Catty excuses herself and flees the creepateria.

A special meeting is called in the clawditorium to welcome Catty to Monster High, but she does not show up. The students and staff are confused, until a remark of Cleo reminds Frankie of "Normal Ghoul", one of Catty's latest songs. She realizes that Catty doesn't want to be treated like a star at all, but as an everyday equal. The school quickly tones down its attitude towards the newest student. Catty is elated to find herself finally out of the spotlight and receives apologies from Frankie on behalf of the entire school for their mistake. Just One of the Ghouls

The Disappearing Club holds a meeting, which is easy for its members to organize since they're only two in numbers: Invisi Billy and Twyla. Surprising the both of them greatly, another student enters the room: Catty Noir. They assume she's there to join their club and welcome her, but Catty assures them she'll be out as soon as the horde of fans stalking her has left. This disappoints Invisi Billy and Twyla, but upon understanding she walked into a club meeting and that the club is centered around disappearing, Catty voices interest in joining to learn to avoid her more zealous fans.

Unfortunately, word quickly spreads that Catty has joined the Disappearing Club and all her fans promptly decide to join to . Invisi Billy and Twyla try to make the best of it at first, but the new members are not only blatantly uninterested in disappearing or the club but also hostile towards them. Nonetheless, they stay with Catty as she gives in to her fans' demands for attention and autographs.

Afterwards, Catty apologizes to Invisi Billy and Twyla and promises that she'll quit so her fans won't bother them anymore. The duo doesn't blame her for the days' events, though, and wishes to help. Even though Catty can't physically disappear like the two of them, there are other ways to hide. They teach her the basics of hiding in plain sight and the next day, her fans find the club room empty. Enraged that Catty isn't there, they all quit and storm off. It is then that Catty reveals herself, stepping away from in front of her own poster. Her fellow club members congratulate her on her achievement. In Plain Fright

The door opens and Operetta lets Catty Noir out, telling her that she nailed the part. Upon seeing this, every ghoul in the queue decides to give up and walk away. Even Lagoona throws up her arms in defeat, claiming there's no way anyone could beat out a famous pop star like Catty. Ghoulia is left alone, and is about to walk away when Operetta spots her and asks if she still wants to audition.

Some time later the musical opens, and to everyone's surprise, Ghoulia is in the lead role. Lagoona explains that Catty was actually auditioning for the secondary role for a change, and since Ghoulia was the only other person who tried out, she got the lead part. Ghoulia and Catty sing together on stage, and despite Ghoulia's voice shattering the spotlights and windows, they receive a standing ovation. Stage Frightened

After performing ("Love is Like a Storm Tonight"), Catty runs out of ideas for writing a new song, so she sings ("Search Inside") to say that she should "search inside" of herself for ideas on a love song. Meanwhile Ramses de Nile sees the crystal comet arriving and he and Nefera prepare to head to Boo York. He also informs Cleo and allows her to take a friend or two with her. However, she invites Deuce (as well as giving him a King Tut-like chin piece and gold glasses), Frankie, Clawdeen, Draculaura, Operetta and Catty.

The crew head to Boo York where they shop for new clothes and wear them out.("Fright Lights, Big City") Luna Mothews, a moth monster girl also arrives and meets them. Cleo takes Deuce with her and turns out Nefera has also invited Toralei. The ghouls also encounter Elle Eedee, a robot DJ who is playing her music on the streets. Cleo, Nefera and Deuce end up in the same taxi as Mouscedes King.

The ghouls are about to take the subway to catch up with Cleo, when they meet a rapper named Pharaoh, who takes an immediate liking to Catty. The duo then make an escape from the crowd of Catty's fans.

The ghouls, including Catty later dress up for the crystal comet. Nefera convinces Cleo that Deuce isn't worth being with. Ghoulia, still trying to make the comet land safely now that she finds life inside it, is interrupted by Rotter, who joins Manny and Heath in witnessing the comet. Later that night, Catty parts ways with Pharaoh after being able to write a new song of her own.

Halfway, Seth takes off his mask and reveals he is indeed Pharaoh, then speaking up against Lux. He sings ("Boo York, Boo York") with Catty and they escape after that.

At the roof top, Nefera steals their voices (they can still speak, but can't sing properly) using the crystal comet shard. Toralei then sneaks off with it and takes Catty's singing voice to perform at Bloodway. The ghouls then confront her musical-style, ("Steal the Show"). Luna not only returns Catty her voice but earns herself fame at Bloodway. Mouscedes then summons taxis for them to return to the promise ceremony. Deuce, who believes he still belongs to Cleo despite their differences, joins them.

The crystal comet arrives in Boo York where they meet Astranova. Catty returns her the shard and everyone celebrates. Boo York, Boo York 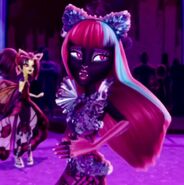 Add a photo to this gallery
Retrieved from "https://monsterhigh.fandom.com/wiki/Catty_Noir/cartoon?oldid=348937"
Community content is available under CC-BY-SA unless otherwise noted.