Not having a pet is just one of the sacrifices I felt I had to make to pursue being a singer but now I'm looking forward to getting something creepy cute and scary sweet.

I look forward to having the chance to make some.

Catty Noir is a 2013/2017-introduced and all-around character. She is a werecat and a student at Monster High. Having striven for a place in the music industry from a very young age, Catty is a world-famous pop star and teen idol, who has many fans at Monster High. It was a meeting with these fans that eventually made her decide to put her career on hold at age 16 to enjoy what remained of her teenage years as a regular student. Though she loves to sing and entertain others, it does her good to finally have time for herself again. One thing she hasn't put on hold is her adherence to superstition. In general, the way it affects her life is small and can be worked with, but occasionally her uncompromising beliefs get her into trouble.

In English, she was voiced by Missi Hale. In Boo York, Boo York and Adventures of the Ghoul Squad in Generation 2, she is now voiced by Karen Strassman.

Her singing voice is by Jordyn Kane in Boo York, Boo York.

Presumably born as a resident of the Boonited States of Scaremerica, Catty discovered her passion and talent for singing at a young age. Her first attempt to find an audience for herself was during a grade school talent show, but she only made it to second place. In response, she dedicated most of her free time for years practicing to perfect her voice and making a name for herself by performing wherever she could. Eventually, she made it big in her early teens and has been touring since. Monsters of Music However, at the age of 16, the pressure of celebrity life, especially the cruelty of tabloid journalism, caught up with her and prompted her to put her career on pause for a while so she could get some time for herself again. For this purpose, she enrolled at Monster High. Catty Noir's LS diary

There are three words that get to the core of who Catty is: superstitious, driven, and grateful. Ever since she was just a little ghoul, Catty has put all her effort into both perfecting her voice and making a name for herself. With the exception of the support her family gave her, she is 1000% self-made. And yet, she is humble about her accomplishments, because she is aware that in the end, all her efforts would have been for nothing if not for the fans who embraced her. She's also quick to give credit to the management and touring crew that arrange everything for her so she only has to worry about singing and reading her fan mail. Catty Noir's New Scaremester agenda Catty is a very superstitious person, which is a fact she is aware of herself and readily admits. Much of this is expressed through ritualistic behavior. She always has a piece of a broken mirror with her on stage, always enters the stage left and after having walked under the stage ladder first, always leaves the stage right and then walks under the stage ladder there, and her pre-concert meal also is always the same: thirteen items, of which seven chicken nuggets, five apple slices, and one strawscary shake.

True to the French origin of her family name, Catty is a black werecat with long, hot pink hair that sometimes is tied up in a ponytail, and she has flashy pink eyes. In her own words, she loves "big, flashy, larger than unlife outfits because they are ghoulishly glitzy, creeporifically cool and fangsolutely fun!" She has the appearance of an anthropomorphic humanoid cat with pointed ears on top of her head, and fangs, though she does not sport fangs in any of the dolls. She also has a tail which is present on both the dolls as well as in the cartoon.

During her years touring, Catty had few contacts that had the potential to evolve into friendships and as such she only has two friends from that time period: fellow singer Casta Fierce and actress Elissabat, although through Elissabat she's also on good terms with Viperine Gorgon. Especially Casta whom she is close with. One special case is Catty's backstage meeting with several Monster High students, of whom Lagoona Blue left the best impression. This meeting was what prompted Catty to consider taking a break from stardom, which she shortly after did to enroll at Monster High for a few years. Catty Noir's LS diary Here, she met fellow musicians Operetta and Holt Hyde, with whom she quickly got along. A Night in Scare-adise: Prom 2014 As well, Catty formed a close connection with her fellow members of the Disappearing Club, Invisi Billy, and Twyla, ever since they helped her avoid the more demanding of her fans among the students. In Plain Fright. Catty also became friends with Gigi Grant during their school tour and shopping trip together in the New Scaremester.

Catty has had a few crushes in her life, but nothing that led to any sort of relationship. Catty Noir's LS diary. Possibly the closest to something intimate was a boy she had lunch with a little prior to putting her career on pause, but it appears nothing more came out of that either. Breaking: Catty Noir's New Romance. During the special Boo York, Boo York Catty and Seth "Pharaoh" Ptolemy fall in love due to their shared passion for music. Boo York, Boo York

Along with being a WereCat, Catty is a Black Cat which are seen in pop-culture as being unlucky and in league with witches. Originally Black Cats were not only seen as lucky but also in a similar vain to Gods but over the course of history they became more and more affiliated with misfortune and witchcraft. According to superstition, a Black Cat crossing your path is extremely unlucky and in colonial times they were depicted as being the familiars to witches and sometimes even shape-shifted witches themselves. This is alluded to through Catty's friendship with Casta.

A monster Black Cat also famously appears in Edgar Allan Poe's short-story The Black Cat (1843) where a one-eyed black cat named Pluto comes back from the grave in order to torment his cruel former owner with supernatural powers. 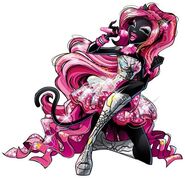 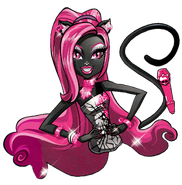 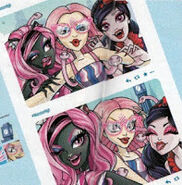 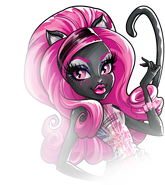 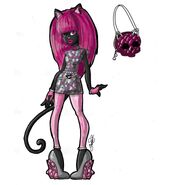 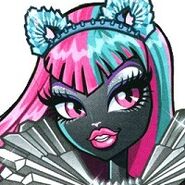 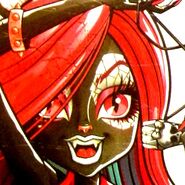 Add a photo to this gallery
Retrieved from "https://monsterhigh.fandom.com/wiki/Catty_Noir?oldid=351633"
Community content is available under CC-BY-SA unless otherwise noted.